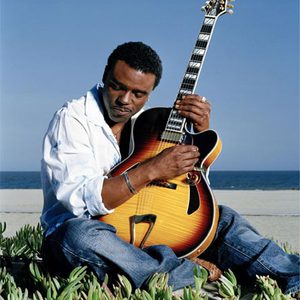 Since the release of his critically acclaimed 2002 album, Just Chillin' - which won a Grammy? in the prestigious Best Pop Instrumental Category - this innovative and original guitarist has been front and center in the fast evolving fusion of pop, R&B and jazz that has captured the imagination of true music aficionados across the country and around the world. Now, with the release of West Coast Coolin'...

Now, with the release of West Coast Coolin', Norman Brown consolidates his reputation as a premier recording and performing artist with a collection of ten tracks -- written and co-written by the artist - that take the sonic adventure of Just Chillin' into breathtaking new spheres. It's an innovation due in large part to Brown's exceptional skills as a distinctive urban vocalist, with the specially selected tracks of West Coast Coolin' providing the perfect vehicle for this dazzling new facet of his career. As a result, Norman Brown joins a very select list of versatile urban artists gifted as both instrumentalists and vocalists.

All which should come as no surprise to savvy music fans. Over the course of five landmark releases and a virtually constant itinerary of international touring, this gifted and gloriously versatile guitarist and vocalist has established himself as one of a handful of preeminent instrumentalists and composers in contemporary musical realms, setting a standard for virtuosity that has placed the Shreveport, La. native in a category of one.

It's a love affair with music that began at the tender age of eight, after the family had relocated to Kansas City. It was there that Brown first heard the mind-blowing brilliance of Jimi Hendrix and determined to make the guitar his life. The obligatory garage rock apprenticeship followed, but it was Brown's steelworker father who eventually introduced his son to the equally life-changing influence of Wes Montgomery and turned his talents toward jazz.

After graduating high school, Brown headed west to study at the renowned Musician's Institute in Los Angeles, eventually landing a teaching job at the school even as he put together his first jazz combo and began playing on the city's thriving club scene. Adding George Benson to his list of seminal influences, Brown had already garnered a small but fanatical following when he landed his first recording contract with Motown Records. Over the course of the next four years he released three critically acclaimed albums, Just Between Us (1992), the gold-selling After The Storm (1994) and Better Days Ahead (1996). The decade drew to a close with a new label, Warner Bros. Records, and one of his most accomplished and assured offerings, the above mentioned Celebration, which marked the beginning of his fruitful collaboration with ace producer Paul Brown.

Celebration was followed, two years later, by the Grammy winning Just Chillin', spotlighting an altogether more laid back sound and an A-list of supporting vocalists that included Michael McDonald, Chante Moore, Miki Howard and others.

The Highest Act Of Love

The Very Best Of Norman Brown