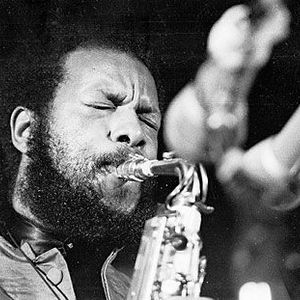 Ornette Coleman (born 1930) is an American jazz saxophonist and composer. He is one of the major innovators of the 1960s free jazz movement and one of the most notable figures in jazz history. Coleman was born on 9th March 1930 in Fort Worth, Texas, where he began performing rhythm and blues and bebop, initially on tenor saxophone. He later switched to alto, which has remained his primary instrument.

Coleman was born on 9th March 1930 in Fort Worth, Texas, where he began performing rhythm and blues and bebop, initially on tenor saxophone. He later switched to alto, which has remained his primary instrument. Coleman's timbre is perhaps one of the most easily recognised in jazz; his keening, crying sound draws heavily on the blues. Part of the uniqueness of his sound came from his use of a plastic saxophone on his classic early recordings (Coleman claimed that it sounded drier, without the pinging sound of metal), though in more recent years he has played a metal saxophone.

Coleman is most famous for his albums The Shape of Jazz to Come (1959), Free Jazz (1961), and Skies Of America (1972). In The Shape of Jazz to Come, he and his famous quartet, consisting of Don Cherry on trumpet, Charlie Haden on upright bass, and Billy Higgins on drums, play solos free of a chordal structure, due in part to the absence of the pianist or guitarist that had been traditional in jazz. On Free Jazz, Coleman brings together his quartet from the previous album, together with multi-instrumental reedist Eric Dolphy, trumpeter Freddie Hubbard, bassist Scott LaFaro, and drummer Ed Blackwell for a forty-minute double-quartet recording. This recording was perhaps his most controversial because it featured dense instrumentation with only brief and dissonant moments of composition, allowing for horn players to chime in to accompany the soloist, and because it contributed the name "Free Jazz" to the avant-garde jazz movements of the 1960s. Skies of America is Coleman's first symphony, recorded by the London Symphony Orchestra. Coleman can be heard playing on this recording, beginning with the movement "The Artist in America".

Coleman has more recently discussed his musical theories of 'Harmolodics', which he attempts to explain in an interview in WIRE magazine 257, July 2005. This theory of improvisation can be and is disputed by any scholar of western music theory, but his completely unique way of dealing with sound is nevertheless fascinating.

Genesis Of Genius: The Contemporary Recordings

The Atlantic Years -The Shape Of Jazz To Come CD1

The Atlantic Years - To Whom Who Keeps A Record CD9

The Atlantic Years - This Is Our Music CD3

The Atlantic Years - The Art Of Improvisers CD7