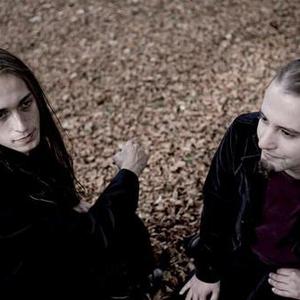 Dornenreich is a Melodic Black Metal band from Tyrol, Austria. The name means realm of thorns (noun) or full of thorns (adjective) in German. Founded in 1996, the band has progressed in style from black metal on their first album, Nicht um zu sterben, to what the band describes as ?a vision beyond (black) metal, neofolk and ambient? on their latest works. The music on their second album, Bitter ist's dem Tod zu dienen, released in 1997, can be described as symphonic black metal with some folk and some gothic influences.

With their most modern-sounding 2001 album Her von welken N&auml;chten they reached a point where deep sentiment and contemplation of life and death induces a very own style of music that was critically acclaimed by all metal magazines. After that album, drummer Moritz Neuner (also in Leaves' Eyes, Darkwell, Atrocity) left the band due to some differences with the two remaining members. Shortly after, an upcoming album with the name Hexenwind was announced, with which the band would return to a more pure black metal style. However, during the track-writing period the band's progression took a new direction towards a more calm and mature approach, and Hexenwind was not released until 2005. In 2006, Val?es left Dornenreich to start a new project called Eyas and Ev?ga found a new Dornenreich member in 2006 as Inve, who had already contributed as a violinist on Her von welken N?chten. By the end of the same year, the fifth album Durch den Traum was released, and the band used a session drummer after Moritz left. Their last release, In Luft geritzt (Carved in air), released in 2008, shows a complete departure from previous styles, where Dornenreich has chosen to play completly unplugged, with only acoustic guitars and violin as instruments and bells as percussion.
Notably absent from their poetry and interviews are allusions to controversial spiritual and ideological issues common with many other bands of similar musical genres.