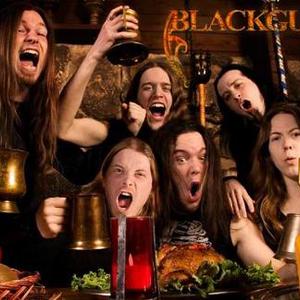 If ever there was a test case proving that hard work, tenacity, a healthy helping of suffering, and word of mouth pay off, Blackguard is it. Formed in 2001 by guitarist Terry Roadcase and drummer Justine "Juice" ?thier as a straight-ahead black-metal outfit, the Montreal-based sextet?who clawed their way into the public eye under the dauntingly ponderous name of Profugus Mortis?has fought a pitched battle to stand out amongst their international metal brethren, having braved numerous line-up changes and much needed sonic tweaking to get to where they were in 2008.

Blackguard as a viable entity was officially born with the addition of vocalist and born frontman Paul Ablaze in October 2004 to Profugus Mortis' ranks, followed a month later by bassist ?tienne Mailloux, with both bringing the necessary dynamics to the band's sound and clarity to the group's collective vision. Staying true to their black-metal roots, the new Profugus Mortis turned their sights on a brutal new interpretation of Scandinavian folk metal.

?This comes to us naturally," says Ablaze, "and we're definitely the sum of our parts. What's going on around us influences us to a certain degree, of course, but in the end we're putting our own spin on it and giving the band its own defining characteristics. Before we came in, the band's sound was a lot more progressive black metal; there were a lot of riffs and tempo changes. But we've gone in a much more straightforward direction since then. I guess we took on a power-metal and a straight-up folk-metal influence along the way."

Wasting no time, they issued a four-song self-produced demo in March 2005, passing out free copies at metal shows in Montreal. In July that same year, Profugus Mortis played the Xtreme Distortion Fest in Montreal with KATAKLYSM and UNEXPECT, winning the coveted slot as Best Unsigned Band at the event. That success translated into a support slot with SODOM and FINNTROLL, which in turn earned Profugus Mortis the opportunity to open for YNGWIE MALMSTEEN at the request of Quebec's Capital du Metal.

Since then, Blackguard (still known as Profugus Mortis at the time) has supported and toured with numerous acts equally respected the world over, including LACUNA COIL, CATAMENIA, WARBRINGER, BEHEMOTH, THERION, INTO ETERNITY, ENSIFERUM, THE AGONIST, CRYPTOPSY, KRISIUN and VOIVOD. Added to this noteworthy rogue's gallery are Canadian tours with the Finnish godfathers of folk metal, MOONSORROW, and more recently QUO VADIS.

Profugus Mortis' first official foray as professional recording artists came in the form of the aptly titled ...So It Begins in March 2007. More a collection of songs showcasing the band's past and their new direction, the album became the best- and fastest-selling album in their label Prodisk's history. The album also signaled the beginning of the end of what was considered by many fans and press people alike to be the one element that made Profugus Mortis unique; in January 2008 violinist Emilie Livernois was given the boot, leaving a hole in the band's sound. Rather than listen to the naysayers, the band raised its middle finger and brought in former GOTHERFALL guitarist Kim Gosselin. It was a perfect match made in hell.

"One of the things that suffered was having a stronger rhythm," Ablaze says of Livernois' violin having been a focal point. "If Terry was doing a lead and Emilie was doing a lead and Jonathan (Leduc/keyboards) was doing his own little thing, the songs could end up sounding pretty weak. It's absolutely fantastic having Kim in the band now, because he beefs up the songs like crazy. The first time we jammed?we sounded like a frickin' beast (laughs)."

That beast, now known as Blackguard, has been unleashed. Their major label debut?entitled Profugus Mortis as a tribute to their past?is an outing that has brought diehard fans and (until now) ignorant folk-metal followers up short. Capitalizing on the best moments offered up on ...So It Begins, the new album is a folk-metal onslaught that redefines the genre and raises the bar to an all-time high. Just as important, if not more so, the new material sees a revamped and hungry Blackguard coming into their own as a live act that cannot be ignored.

If all the world is a stage, it belongs to Blackguard?starting now.