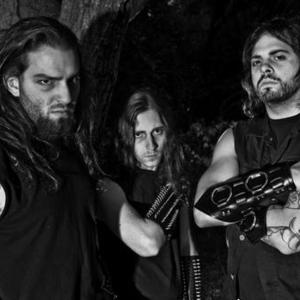 The group's second full album, "In The Absence of Light", taps into the spirit of the band's chosen style but injects it with intricate touches of classic and thrash metal. Raw, but clear production and a venomous zeal, it is as infectious as it is lethal. ?The whole record is pretty bleak and depicts a world completely void of light,? says frontman Sorceron. ?And I think it's just a product of the environment we live in and a reflection of the way I see humanity heading.?

In some ways, "In The Absence of Light" is true to the rules of black metal. The vocals are harsh and shrill, sounding like the product of a lacerated larynx. The guitars buzz, rip and roar alongside articulate, rapid licks and blazing solos. And the drums slam and crash like exploding mortar shells, whether battering with blast beats, double-bass rolls or syncopated snare hits. There is just the right amount of haunting keyboard washes, though the keys (all played by Sorceron) take a definitive back seat to those on Abigail Williams' 2008 disc "In The Shadow of a Thousand Suns."

?I like keyboards, but before we started this record we decided to get rid of a lot of them because we wanted to do something different. We don't want to make the same record over and over.?

In addition to scrapping the keyboard overload, Sorceron did away with the studied, belabored work ethic he had when he wrote "In The Shadows of a Thousand Suns." All of the songs for "In the Absence of Light" were written and recorded in a frenzied four weeks between February and March 2010. And while none of the songs on the album sound rushed, they're filled with gripping urgency and immediacy.

?We kept everything raw and didn't allow ourselves to embellish anything,? Sorceron says. ?When it was time to do the lyrics, I wrote them the same day I performed them on the record. We wanted to take a real spontaneous approach and not over think anything. I'm really proud of what we did.?

Abigail Williams tracked "In the Absence of Light" at "Conquistador Studios" in Cleveland, Ohio. For the first three weeks, the band collaborated in ways unlike previous recordings. Sorceron, guitarist Ian Jekelis and drummer Ken Bedene jammed out ideas working as a collective unit. ?I only had two songs written when we came into the studio,? reveals Sorceron. ?We literally played and recorded for hours. Then we would listen back and pick out what we thought was good and we'd start to put songs together.?

"In the Absence of Light" was produced by Sorceron with additional engineering assistance by Cole Martinez. The album was mixed by the legendary Peter Tagtgren (Hypocrisy, Dimmu Borgir, Immortal). ?Peter was amazing,? Sorceron says. ?I sent him rough mixes of how I wanted things to sound, and he surpassed what I wanted. He left intact the sound sonically and left the rawness in there and he mixed it quickly, too, which I prefer for our sound. I couldn't have asked for the record to come out better.?

Formed in 2005 in Phoenix, Arizona, Abigail Williams is named after the eleven year old girl who was one of the first two accusers in the Salem witch trials of 1692. After touring exhaustively, the band released their debut EP "Legend" in 2006. Touring continued leading the band in 2008 to enter the studio with producer James Murphy (ex-guitarist of Death, Disincarnate and Testament) to track their full-length debut "In the Shadows of a Thousand Suns." The album featured guest performance from Emperor/Zyklon drummer Trym Torson. More touring and a rash of lineup changes followed before Abigail Williams went to Cleveland for "In the Absence of Light."

?We did it in Cleveland because it's one of the grimmest cities I've ever been in,? Sorceron says. ?It's where we wrote the last album as well. There's just something about the city that fits this music. It's a crappy, dark, cold place, especially in the winter. It's already a ghost of a place and the winter really amplifies that. I couldn't wait to get back to New York afterwards, but I think being in Cleveland allowed us to capture the vibe we were after.?

With the band's strongest lineup to date and best material so far, Abigail Williams are prepared to change people's preconceptions about what black metal is supposed to be. In September the band will tour North America with Immolation, Vader, Lecherous Nocturne and Pathology and, while they plan to be more selective than they've been in the past about bills they'll play, Abigail Williams hope to spread the black magic onstage until their name is synonymous with the progenitors of the genre that once inspired them.

Abigail Williams have posted the song ?Final Destiny of the Gods,? the first new song from their anticipated second album "In the Absence of Light" to their official MySpace page. Fans can have their first listen by visiting: http://www.myspace.com/abigailwilliams.

Formed in 2005, Abigail Williams have been called ?a buzz band,? and ?a band to watch.? They have endured more than their fair share of opposition, including revolving door member changes and in 2007 altogether disbanding. But through it all, the core of the band has kept a level head, a steady eye, and an unbridled passion for what they do. The band's 2006 Legend EP and 2008 debut, "In the Shadow of a Thousand Suns" (produced by James Murphy and featuring Emperor drummer Trym Torson) have now sold a combined 35,000 in the US. The band has toured exhaustively including their most recent West Coast headlining dates.

In 2010 the band toured across the US performing alongside Immolation, Vader, Lecherous Nocturne and Pathology for four weeks.

Walk Beyond The Dark

In The Absence Of Light

In The Shadow Of A Thousand Suns: Agharta (Special Edition) CD2

In The Shadow Of A Thousand Suns (Special Edition) CD1

In The Shadow Of A Thousand Suns