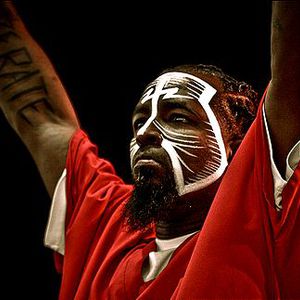 Aaron Dontez Yates (born November 8, 1971 in Kansas City, Missouri), better known by his stage name Tech N9ne or Tecca Nina is an American rapper, co-owner of Strange Music Records and actor. His career has spanned over 24 years, during which he has released eleven albums. According to the He's a Mental Giant Songfacts, his stage name originated from the TEC-9 semi-automatic handgun, given to him by rapper Black Walt due to his fast rhyming style.

His tenth studio album, K.O.D., was released October 27, 2009. He has spent his illustrious career making sure he's been grinding harder than the average rapper, and is the best selling artist out of his hometown. With nine solo albums and two powerhouse collaboration projects under his belt, the Kansas City MC's flow is sharper and slicker than it's ever been.
?This is another roller coaster ride,? explains TECH N9NE about the release. ?When it came time for Sickology 101, I knew I wanted to do a collabo album based on the study of being sick. It's a beginner's course for people who don't know how to be sick lyrically or how to choose sick beats. It all starts with beats because they tell me exactly what to do.? Epic beats from YoungFyre, Wyshmaster, Seven and Matic Lee set the stage for TECH N9NE to weave his introspective and sometimes roguish lyrics around.

Sickology 101 brims with stellar appearances from lyrical heavyweights. On the opening title track, TECH N9NE slays alongside Chino XL and Crooked I, pulling listeners into the Hip-Hop classroom for a lesson in murdering a beat. It's a twisted vision forged on undeniable grooves and quixotic wordplay.

The single, ?Nothin,'? is an inspiring, honest anthem that features Messy Marv and Big Scoob. Meanwhile, on ?Midwest Choppers 2,? TECH N9NE and Krayzie Bone cruise to the depths of darkness. ?Krayzie Bone came through and murdered it,? says TECH N9NE. ?I modeled the song after movies. When you do a sequel, there has to be a bigger body count and more people have to die. ?Midwest Choppers 2' is Autobahn-style. It makes you want to speed.?

TECH N9NE's inimitable flow and rhyming take center stage on solo tracks, including the haunting, hypnotic ?Red Nose.? He doesn't pull any punches on the vitriolic, YoungFyre-produced ?Blown Away,? either. It's an open letter to several prominent urban artists who refused to play before him at radio festivals despite his massive concert draw.

With hits like ?I'm A Playa,? ?Caribou Lou? (which boasts 7.2 million MySpace plays), ?Riotmaker,? ?Like Yeah? and ?Everybody Move,? it's no wonder TECH N9NE counts a total of over 4.5 million YouTube video plays and an average of 40,000 MySpace visitors each day. His success knows no limits. The July 2008 release, Killer, debuted at Number 1 on the Billboard Top Independent Albums chart and Number 12 on the Billboard Top 200 Albums chart. He did it all on his own. There was no major label ? just TECH N9NE's own record company, Strange Music. TECH N9NE's tracks have appeared in films like Gang Related and Alpha Dog as well as various TV shows, and he recently made his motion picture debut in The Life of Lucky Cucumber alongside members of MTV's ?Jackass? crew.

It hasn't been an easy road, but TECH N9NE soldiers on and he'll never stop. ?They call me devil worshipper because I'm different. I give you music for my core. They're the people that put me over the million mark. I raise my middle finger to everybody who judges me because my core audience is there for me. They will always love me, but I'm trying to reach others, too. It's not over. My music is supposed to be for everybody, but some people just don't get it. This album is the result; swallow it. It's middle finger music, all-day and all-night.?

TECH N9NE never stops bringing that music directly to his fans, constantly reinforcing his status as one of the hardest-touring rap acts in the business. In 2008, TECH N9NE performed over 200 shows and he doesn't show any signs of slowing down in 2009. In April, TECH will head out in support of Sickology 101 and spend two months on the road, performing live for his rabid fans.

Sickology 101 is prepping the world for TECH N9NE's next masterpiece, K.O.D. ?I want people to know that I'm getting better and better and I'm a machine. I do these collabo albums to give the fans more. This is a bridge record to K.O.D. It's the farewell to the TECH N9NE you've known lately. It's getting darker. A lot of people might not be able to go to the place I'm going, but this place is my specialty.?

?I don't need people to kiss my hand,? assures TECH N9NE. ?I'm not trippin' on status, and I'm not a narcissist when it comes to rap. It's my heart and soul pouring onto the paper. I write my life and I can't hold back. This is what I know.?