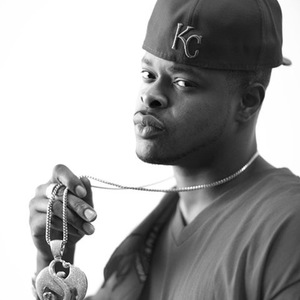 Hotness drives hip-hop. The hottest albums, the hottest lyrics, the hottest beats, the hottest videos, the hottest clique: every rapper wants to have all of the above.?Kutt Calhoun has them all and stands to be the next, hottest rapper. The Kansas City chief's debut album, the scorching ?B.L.E.V.E.? (Strange Music/MSC Entertainment), fires on all cylinders and introduces hip-hop's next star to the world.

Kutt got the album title from people who deal with heat on a regular basis. ?It's a firefighter term that I got off TV,? he explains. ??It means Boiling Liquid Expanding Vicious Explosion. That's the most extreme hot that something can get. ?I figured I'd name it that because everybody's saying they're hot. I figured I'd come up with something that's above that category and have that as my album title.?

?B.L.E.V.E.? kicks things off with the sizzling ?Bring Da Flames.? A take off of Method Man's classic ?Bring The Pain? single, Kutt's track summarizes the type of heat he'd be bringing on his album.??What I was looking for was a title track for the album,? he says. ?That Method Man hook was a catchy hook and it was what I was looking for and with what my album stands for, I had to bring the flames. I switched it up, put my own little twist on it and I love the way it turned out.?

Kutt displays controlled energy on ?Keep It Keebler,? a funky, laid-back song sure to introduce the country to a new catch phrase. ?It's about keeping it about money, keeping it green,? Kutt says. ?Get your money. Whatever you're out here doing, hustling, working, pimping, whatever you're doing, just ?Keep It Keebler,' in other words keep it real. I thought it was a catchy saying, kind of like how Lil Wayne came out with ?Bling Bling.' I figured ?Keep It Keebler' would be a catchy saying that people outside of the Missouri area could catch on to.?I figured it would be some new slang to introduce people to.?

Indeed, one of Kutt's strengths is to introduce new perspectives and new ways of looking at old problems through his music.?On the stirring ?N A Whitemanzeyes,? Kutt gives an impassioned look into the ways black are viewed in America, while on ?To Whom It May Concern,? Kutt teams with Skatterman & Snug Brim and BG Bullet Wound to give an unconventional look at the role various government officials play in our society.

These cuts showcase Kutt's ability to examine issues that dig beneath the surface of everyday life.??I'm more than just rapping about some bitches, getting some money, shooting this guy or just kicking it,? Kutt says.??There's more to me than just that and I had to let the people know that that's how I feel. Nothing on a prejudice tip, but ?N A Whitemanzeyes' is basically saying that through the white, political eye of the government and certain legislations is that this is how they view black people.?They just view us as angry, as people that'll never make it, people with no brains, people that sell drugs.?

Yet Kutt still enjoys life's pleasures. He dedicates ?Real Sex? and ?Panic Box? to his female followers. The former features a warbling beat and frank sex talk, while the latter has Kutt rapping over the beat for Too Short's classic ?Don't Fight the Feeling.? As a long-time $hort fan, Kutt was itching to redo one of his songs.

?I always wondered why no one did a remix to that, man,? he says. ?That's such a dope beat that it's been 15 years since it came out and that beat will still get a party jumping, somebody's head bobbing as soon as they hear it.?I wanted to bring it back on the freaky tip for the ladies, so the ladies would have something. Besides that, I figured that would be a beat to where it comes on, even if they don't know who I am, that beat is going to catch their attention. Once they get to listen to it, I think it will be a well appreciated song.?

Kutt's album, at times celebratory, other times stinging, results from his volatile upbringing. Born and raised in Kansas City, Kutt Calhoun shuttled between his mother and his sister's house during his formative years. While at a Kansas City YMCA during the summer before ninth grade, Kutt realized that his ability to cleverly put words together could have benefits beyond the classroom.?Kutt discovered that he could rap.

Even with his passion for music, Kutt turned to the streets once the instability at home became too much for him to bear. By age 16, Kutt was supporting himself by selling drugs, sometimes taking trips out of town to transport product. ?While in St. Joseph, Missouri, in 1996 Kutt got a wake-up call. He was shot in the back. ?

?It was like a big-ass smack in the face,? he says.??It was like, ?Hold up, Kutt. ?You need to slow down.' ?I got shot in the back. The bullet ricocheted off my pelvis. I had to get surgery on my stomach. They had to go in through my stomach and get the bullet out and I had to get 18 staples in my stomach. I could have died. I took that as a smack in the face, man, more or less like a blessing from God. This was my warning. I stopped selling dope altogether.?I started chilling out, writing rhymes all the time and freestyling. Then I ran into some guys that noticed my talent and I'm thankful for that.?

Kansas City businessmen Cory Lark and Derek Miller recognized Kutt Calhoun's potential in 1998 and gave him a chance to polish his rapping skills. For the first time, Kutt was in a recording studio, pursuing his musical aspirations. The environment pulled him from the streets and he was soon spending virtually all of his time at the studio.

While recording, Kutt started working with a producer who was also recording with Kansas City rhyme legend Tech N9ne. A long-time fan of Tech N9ne's work, Kutt made an impression with Tech thanks to his uncanny ability to rap for hours at a time. Impressed by Kutt's work ethic, Tech N9ne in 1999 enlisted Kutt as one of his hype men, taking him on several national and international tours and eventually signing to Strange Music/MSC Music Entertainment, home of Tech N9ne.?Kutt's alliance with Strange set the stage for ?B.L.E.V.E.,? which features several guest appearances from Tech N9ne. ??

?I feel real privileged to be in the position I'm in,? Kutt says.??I could have been somewhere else. I could have been dead or in jail. Everybody's life is designed a certain way and I'm glad everything happened the way that it did because if it didn't, I wouldn't know Tech, I wouldn't be at Strange, I wouldn't be in the position I'm in.?I wouldn't have damn near traveled all over this world, getting to do the stuff that people only dream to do. There aren't too many people out there that can say that they've done the stuff that I've done.?I don't take that for granted at all.?I feel blessed and I'm thinking that it's only going to get better.?