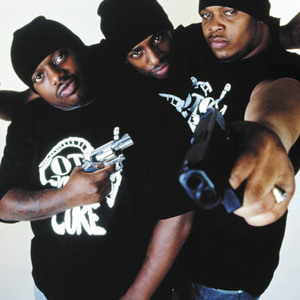 The Dayton Family is a hardcore "Gangsta Rap" group from Flint, Michigan, USA, roughly an hour north of Detroit. Flint is home to some of the most depressed, dangerous ghetto neighborhoods in America. It was from these hopeless streets that the Dayton Family arose, naming themselves after one of the city's most infamous hustling streets, Dayton Avenue. Like Detroit's Esham and Memphis' Three 6 Mafia, the Dayton Family sincerely emulated their Midwestern mentality: a dark, grim mentality focused on modest survival rather than riches or fame.

Unfortunately, the group's members all endured problems with the law throughout the late '90s. Their numerous indictments prevented them from ever capitalizing on their modest success. As a result, years passed with only the occasional solo album to retain any interest in the cult group.

The Dayton Family originally formed in the early 1990's. The group consisted of Bootleg ( Ira Dorsey ), Shoestring ( Raheen Peterson ), and Backstabber ( Matt Hinkle ). They decided to name the group after one of Flint's most infamous hustling streets, none other than Dayton Avenue. Immediately after the group's formation they began writing rhymes together, resulting in their first song "Dope Dayton Ave". They teamed up with local producer Steve Pitts and recorded their first full album "What's On My Mind?". It was released locally in 1993, and then again nationally on April 27, 1995. Soon after, they also contributed the song "Stick N' Move", to No Limit's "Down South Hustlers" compilation album, which helped them to gain fans in the American south.

After much touring and word of mouth promotion, TDF had begun to develop quite a reputation in the hardcore "gangsta rap" underground scene, mainly across the MidWest and South. They then entered the studio to create their second album, "F.B.I." (Fuck Being Indicted). The group was now a duo consisting of Bootleg and Shoestring since Backstabber had been arrested on drug charges and sentenced to a ten year prison term between "What's on My Mind?" and "F.B.I.". The album was released on September 24, 1996. It soon went gold and managed to make it's way into the billboard R&B/rap top ten chart in late 1996. But unfortunately, just as the Dayton Family were on their way to mass recognition in the hardcore rap underground, the law intervened. But if this wan't enough hard luck, Bootleg was indicted soon after the release of F.B.I.

Finally, in 2002 the group released their first LP in five years: "Welcome to the Dopehouse", with the addition of Ghetto E as the third member. The group then waited until July 26, 2005 to release their fourth LP "Family Feud" once again as the duo of Bootleg and Shoestring. The album was well received by fans and featured appearances from Capone, Cormega and Kurupt. Bootleg then proceeded to release his third solo album "The Product" on October 25, 2005. TDF recently released a 9 track EP entitled "Back on Dayton Ave." in April 2006, featuring long time staple of the "Flint Town" rap scene and collaborator, Jake the Flake as the group's third member. The Dayton Family is now signed to U Be U Records based in Saginaw, Michigan.

On July 14th, 2010 it was announced on the official website of the Insane Clown Posse and through all Psychopathic Records outlets that The Dayton Family had been signed to their sub-label, Hatchet House.

Back On Dayton Ave.

What's On My Mind?