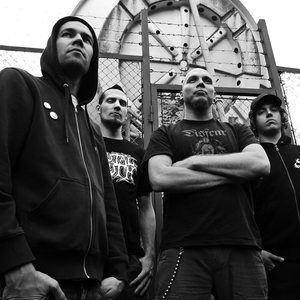 Rotten Sound was formed in 1993 in Finland. After a slew of underground releases, singles and EPs, the band unleashed their debut album "Under Pressure" in 1997 on Repulse Records and "Drain" followed in 1998. On year 2002 Rotten Sound released the genre-defining Murderworks (Necropolis/Century Media), one of the corner-stones of modern grindcore and after the release, Rotten Sound found themselves headlining a European tour.

On January 2005 Spinefarm released "Exit"-album, which went immediately to the Finnish charts and stayed for three weeks. "Exit" also received praising reviews from different medias around the world and was claimed as one of the most important extreme releases of the year 2005. After the release of "Exit" Rotten Sound toured in Scandinavia, U.S. and went on a second headlining tour in Europe during January 2006.

Sami Latva joined Rotten Sound in February 2006 to replace long-time drummer, Kai Hahto. The band was expecting to go on a hiatus in 2006, but, thanks to Sami, could start to prepare for the next studio session immediately. They recorded eight new songs for "Consume to Contaminate"-MCD during April 2006. Lyrical content of "Consume to Contaminate" is handling again difficult issues on this globe with loads of cynisism and a touch of death.

Rotten Sound has made four full length albums, ten shorter releases, five European tours, two U.S.-tours, three scandinavian tours and is one of the leading bands in grind-core. Now "Consume to Contaminate" introduces the new heavy, aggressive and insane Rotten Sound: a band which is prepared to take destructive powers of grind-core a few big leaps ahead.

From Crust Til Grind