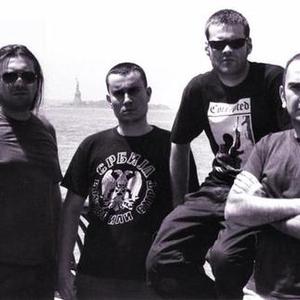 Introduction written by Mike IX Williams (EyeHateGod / Arson Anthem / Outlaw Order) "In being a surviving unit like Cripple Bastards for some 20 odd years, it takes much persistance, perserverance and an undying spirit to wreck yourself, all out with Brutal-Fucking-Grind. Yeah, I said it. I said Brutal, so what. Brutal. That's the supposed overused adjective that most 'heavy' band bios and descriptions overlook nowadays for fear of oversaturation or an unoriginal 'old school' repetitiveness. Thats the one word in the dictionary that C.

. should have fucking copywritten a long time ago. It fits them. It defines them. It IS them. Cripple Bastards are indelibly BRUTAL. In all ways; music, violence, artwork, attitude, politics. All born of this represenatitive and passionately destructive word. The mere fact that C.B. even exist confirms they OWN the goddamn word. C.B. are B-R-U-T-A-L. Understand it NOW. "


Asti. Northern Italy. March 1988. The consolidation of the friendship and the common passion for extreme violence between drummer/vocalist Giulio the Bastard (aged 14) and guitarist Alberto the Crippler (aged 17), both coming from local thrash/punk bands that didn't fit their tastes and didn't match their ambitions, spawned the CRIPPLE BASTARDS.

The initial aim of the two youngsters was to keep alive the legendary Italian hardcore spirit of CCM, Negazione, Raw Power, Wretched etc. and to mix it with the fresh extremism of the fastcore / grindcore pioneers releasing records through revolutionary labels like Children of Revolution, Earache, Peaceville and Manic Ears. This original crossover of styles, coupled with the aural viciousness inspired by early noisecore outfits like Seven Minutes Of Nausea, was topped by Giulio's unique creative approach at lyrical writing focusing on human annihilation and existential decay.

From the early 2 piece line-up (1988-1991), CRIPPLE BASTARDS gradually added new members (mainly drummers and bass-players, keeping GTB on vocals and ATC on guitar) but had to deal with constant personnel changes until core member Alberto the Crippler definitely abandoned music in 1998, the year the band found the definitive line-up consisting in:

After 5 successful demotapes and 3 x 7" ep's recorded between 1988 and 1993 and distributed through Giulio's own "E.U. '91 SerbianLeague" D.I.Y. label, the CRIPPLE BASTARDS start to build a solid reputation of merciless noise mongers. They gained cult status worldwide by releasing more than 20 EPs / split EPs, 4 full length albums, 2 anthological collection CDs and the "Falafel Grind" tribute CD with 32 international bands covering their most classic tunes.