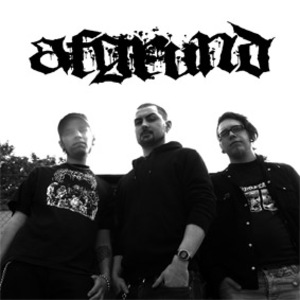 Afgrund is an international grind band(swe/ita/fin) based in Stockholm, Sweden. Formed in 2006 by Andreas Baier as guitarist and vocalist, the band did few line-up changes in the time before consolidating as the actual trio, seeing Panu Posti on drums and Enrico Marchiori as bassplayer and second vocalist. 2006, the band recorded the demo CD "Hj?rtslag och Djupa Andetag" and performed few gigs in Sweden.

In 2007, they released their debut album "Svarta Dagar" and a split CD with Relevant Few(both on Lifestage Productions) and started playing a lot all over Europe; including a 3 weeks tour and the Obscene Extreme Festival. In 2008, the US re-issue of "Svarta Dagar" on Emetic Records and a tour in the US, including a performance at the Maryland Deathfest; few more gigs and festivals in Europe that summer before leaving, in September, for a UK tour. In October, they recorded the tracks for their second album "Vid Helvetets Grindar" which came out in May 2009 on the american Willowtip Records.

The Age Of Dumb