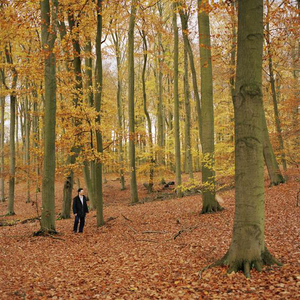 With plenty of musical history and an unfettered passion for contemporary club tracks Stefan Betke aka Pole is probably best known for his minimal dub sounds between the clicks and cuts of modern electronica. While the origins of Pole hail back to the summer of 1996, when he accidentally dropped his near legendary "Waldorf 4-Pole" filter (which, in its newly damaged state, began to generate seductively unpredictable crackles), Betke's musical playing field covers a much broader spectrum.

An active remixer, label owner, musician, DJ, mastering engineer, promoter, studio owner and producer, all of Betke's outlets are governed by his urge to distil the substance of sounds and ideas, irrespective of any scenes. For Betke it's the content which counts, rarely the environment it was generated in. This is mirrored by both the titles of his previous albums, which were kept deliberately simple (blue/1997, red/1999, yellow/2000) to avoid any distraction from their actual content, and his very personal selection of other projects.

Besides ~scape, the label he founded in 1999 together with Barbara Preisinger, he runs a music publishing company (~scape publishing), produces acts like Barbara Morgenstern and remixes tracks from Egoexpress to Depeche Mode.

Like many other producers and musicians, the Berlin-based artist also fills clubs, radio shows and festival stages with his DJ sets, but Betke is no DJ in the traditional sense. Until recently, he used to create entirely new productions from scratch. To cut a new groove from his favourite sounds he would combine two turntables, two CD-players and a laptop, then juxtapose jazz and dub with a little Steve Reich thrown in, up to the point where four tracks were simultaneously fighting for attention, to then be re-sampled and mixed on his laptop. Nowadays Betke makes do with a more conventional set-up and builds his sets around experimental hiphop and electronica.

With his new series ("45/45", "90/90", "Pole"), where two EPs merge in an album, Pole has gone back to the future, back to his own roots ? from hiphop to techno and back again. A fertile way to come full circle, augmented by his own experience. Similar to the blue-red-yellow album, which only revealed its overall idea in the combination of all separate recordings, Betke has managed to create a series which continues to evolve with every instalment. And this almost architectural approach is accompanied by a fundamental musical change of direction.

Although the tracks stay faithful to the spirit of dub and Betke's trusted production formula (i.e. computer arranged sound design which, in the tweak of the tiniest loop, celebrates reduction right down to the essentials), "Pole" shows a much greater affinity to hiphop, making the album substantially more organic, percussive and funky than Betke's previous recordings.

Also, for the first time, a voice has been allowed to enter the mix, that of Ohio-based rapper Fat Jon. Direct, subtle, unforced and forceful "Pole" gains more and more transparency, with or without its vocal support ? no clicks, no scratches, no scrapes, no nothing dilute the strict clarity of his new output. Goodbye "Walldorf 4-Pole", welcome Stefan Betke.

"I spend a lot of time reducing the structures of my tracks to create, step by step, layer by layer, a foundation with true validity." And this is something he continues to excel in.