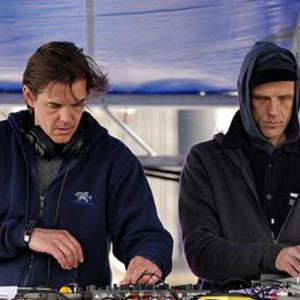 Basic Channel is a minimal techno production team and record label, composed of Moritz Von Oswald and Mark Ernestus, that originated in Berlin, Germany in 1993. The duo released a number of vinyl-only tracks under various aliases, each of which employed their signature brand of dissonant dub techno. The nine original releases were each primarily identified as Basic Channel productions by their catalogue numbers, as the Basic Channel logo on the label became more distorted and unreadable with each subsequent release.

The Basic Channel record label released only a single CD, a self-titled compilation of edited versions of their extended vinyl tracks, which exemplified their seminal brand of dub informed Detroit techno. All Basic Channel CDs were released in recognisable aluminum packaging which notoriously cracked the CDs when they were removed.

The duo set up a studio in Berlin on Paul-Lincke-Ufer, in a building which was eventually to house Mark Ernestus' distributing company and shop Hard Wax, and the label's mastering studio Dubplates & Mastering, set up to ensure a desired dynamic quality for the vinyl.

The Basic Channel imprint ceased business in 1995 (apart from two releases almost a decade later that were originally issued on Carl Craig's Planet E label), but were followed by a string of similar labels. Among the most important were Chain Reaction, which released non-Von Oswald/Ernestus productions and helped launch the careers of dub-influenced minimal techno producers such as Monolake and Porter Ricks; Basic Replay, which specialises in reggae and dancehall re-issues; Main Street, for house-related releases; and Burial Mix and Rhythm & Sound, which saw the duo's sound move away from the Detroit blueprint and closer to vocal-lead dub and reggae. Their With The Artists album, released as Rhythm & Sound and featuring celebrated reggae and dancehall vocalists such as Sugar Minott, featured in the top 50 records of the year for 2003 in The Wire magazine.