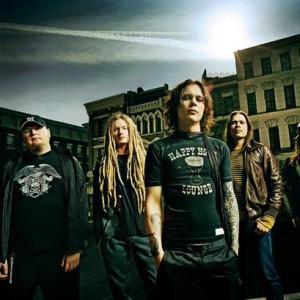 There are multiple artists with this name: 1) HIM is an alternative rock band from Finland. 2) HiM, a solo project put together in 1995 by Doug Scharin (drummer for June of 44, Rex, and Codeine). 3) HIM, acronym for "Hiromasa Ijichi Melodies," a Japanese group. 1) Formed in 1991 by vocalist Ville Valo, guitarist Mikko Lindstr&ouml;m (Linde), and bassist Mikko Paananen(Mige). Today the band consists of the previously named as well as a drummer Mika Karppinen(Gas) and a keyboardist Janne Puurtinen(Burton). The name HIM was originally an abbreviation for "His Infernal Majesty", but was changed to the initials to avoid confusion with the occult. The name "HIM" later caused confusion when touring in the US, because of another band using the same name (read below at 2)).

1) HIM is an alternative rock band from Finland.
2) HiM, a solo project put together in 1995 by Doug Scharin (drummer for June of 44, Rex, and Codeine).
3) HIM, acronym for "Hiromasa Ijichi Melodies," a Japanese group.

1) Formed in 1991 by vocalist Ville Valo, guitarist Mikko Lindstr&ouml;m (Linde), and bassist Mikko Paananen(Mige). Today the band consists of the previously named as well as a drummer Mika Karppinen(Gas) and a keyboardist Janne Puurtinen(Burton). The name HIM was originally an abbreviation for "His Infernal Majesty", but was changed to the initials to avoid confusion with the occult. The name "HIM" later caused confusion when touring in the US, because of another band using the same name (read below at 2)). For this reason, the band was -jokingly - for some time known as "HER" in the States, and even more jokingly HIM&Her in Germany.

The EP, '666 Ways to Love: Prologue' (1996) was their EP released only in Finland and only 1,000 were produced making it worth up to $700 and has been sold on eBay for more. HIM's first full length album "Greatest Lovesongs Vol. 666" (1997) gained European fame due to the success of the cover of Wicked Game the album also featured a popular cover of (Don't Fear) The Reaper.

For their third album, HIM released, Deep Shadows and Brilliant Highlights (2001), spawning the popular singles In Joy and Sorrow, Pretending and Heartache Every Moment

Love Metal, HIM's fourth album, was released in 2003 in Europe but was not released in the US until 2005. It featured the hit singles Buried Alive By Love, The Sacrament and Funeral of Hearts. The entire album was played, track by track, live in Hamburg in 2003. This show is known as "Live Metal", and can be obtained on several bootlegs both on DVD and CD.

Their fifth album, Dark Light (2005) features the hit singles Wings of a Butterflyand Killing Loneliness. was the first Finnish album to sell to gold in the US. It also went on to gain HIM major success in the UK.

HIM's sixth album, Venus Doom was released officially around the world 14-18 September 200. The video for the main single on the album, Kiss of Dawn, was shown on british Scuzz TV on August 10. The album also features HIM's longest track to date Sleepwalking Past Hope, which is 10 minutes and 3 seconds long. The other single from Venus Doom was Bleed Well.

HIM went on to release Screamworks: Love In Practice and Theory in 2010. Their first single of the album Heartkiller released a couple of weeks before the albums release, which was a week before valentines day. Ville said that the album was originally written for a release date on 14 February 2010, stating that alot of the albums influence was about a previous relationship and that he wanted her to hear it on valentines day.

Additionally, the band has released three compilation albums; 'And Love Said No' (2004) and 'Uneasy Listening Vol.1' (2006) & 'Uneasy Listening Vol.2' (2007). It is also worth mentioning that all of their albums and singles (not the EP) has been released in multiple versions, with various bonus tracks and special edition covers, etc.

HIM uses a widely famous logo called the 'heartagram', which is a pentagram crossed with a heart. It's also been said that Valo designed it as he waited for his friends to bring over beer on his 20th birthday and was inspired by this Finnish private hospital logo. The symbol represents the balance between love and hate, life and death, dark and light, good and evil and sometimes love and death. Because of this logo they have been wrongly labeled as satanic. Valo originally wanted to make several symbols, like Led Zeppelin did, but realised he didn't have the drawing talent to pen them, nor the memory to remember them.

Bam Margera has legal licensing rights to this logo in America, which he acquired off Valo. The two have been friends since Margera saw the band perform in Finland, and was let in backstage by the band. He has directed a number of HIM videos, including Buried Alive by Love, where the actress and rockstar Juliette Lewis also appears. Valo has also appeared in episodes of Margera's TV show called Viva la Bam, and the CKY videos. Margera has used HIM's music for nearly all of his projects, including the feature film Haggard

In 2001 Mikko Lindstr&ouml;m, Mikko Paananen, and Ville Valo had a side project called Daniel Lioneye. Ville Valo was using a covername Bil Bao and his face was covered in their video for "Never Been In Love (Till the Day I Die)". This band's hit called "The King of Rock'n Roll" is a theme song of Viva la Bam.

2) HiM is a dub influenced post-rock group formed in 1995 by Doug Scharin, drummer for the bands Codeine, Rex and June of 44. Their first album, Egg, was their most dub-based effort. Each successive album has gone more in a quasi-world music direction. After some recording for Crooklyn Dub Consortium and Wordsound, "Interpretive Belief System", HiM settled on a lineup of Scharin with Bundy K. Brown, Rob Mazurek and Jeff Parker, members or occasional members of Tortoise and Isotope 217. Their first album was the underground hit Sworn Eyes, produced by [Doug Scharin]. A few personnel changes followed, and the revamped lineup including members of June of 44, Golden released Our Point of Departure in 1999, which signified a very clear shift toward a more jazz-like sound, followed by a major American and European tour. In 2003, HiM released Many In High Places Are Not Well on Fat Cat Records, which was received as their most successful and fully realized release. Peoples was released in mid-2006, featuring a cleaner sound with more vocals than any of HiM's previous releases. Included in this line-up are Martin Perna and Jordan McLean from Antibalas Afrobeat Orchestra, Griffin Rodriguez from Need New Body/Icy Demons, Adam Pierce (Mice Parade). The latest HiM records, "1110" and ?,released in 2008 and 2009 on Afterhours in Tokyo, are collaborations between Doug Scharin, Josh Larue and the Tokyo based group, Ultra Living.

3) The group was composed of the following main members: