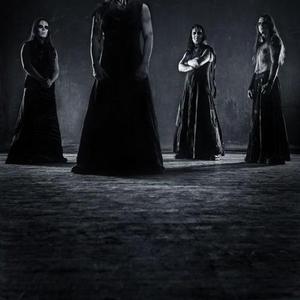 There are at least 4 artists named HATE: 1) Death metal band from Poland; 2) A label releasing anonymous oldschool jungle tracks; 3) Hardcore band from Chicago; 4) Death metal/thrash band from Greece. 1) Considered as one of the leading extreme metal acts coming from Poland, HATE have endured quite a few lineup shifts during their career, with founding singer/guitarist Adam "ATF Sinner" Buszko being the only constant member.

1) Considered as one of the leading extreme metal acts coming from Poland, HATE have endured quite a few lineup shifts during their career, with founding singer/guitarist Adam "ATF Sinner" Buszko being the only constant member. HATE started in 1990 as four-piece playing straight uncompromising death metal, which later developed into a more elaborate form containing industrial and ambient elements as well as distinct black metal influences. In the first half of the nineties, HATE issued several demos ,"Abhorrence" (1992), "Evil Art" (1994), "The Unwritten Law" (1995), before releasing their first full-length record, "Daemon Qui Fecit Terram", in 1996 on a Polish label Vox Mortiis. The record demonstrated great potential of the group, presenting ferocious death metal with obvious influences from American acts like Morbid Angel and Deicide. Two years later HATE released another album titled "Lord is avenger" (1998), which is considered as highlight in their early years. It was the group's first material distributed outside their native homeland of Poland. The next record "Cain's Way" (2000) showed further development of the band and gained good reviews in the metal press. The album had also its premiere in the USA on World War III/Mercenary Musik, but poor distribution and promotion made it a relatively unknown record.

The first breakthrough in the band's career came along with signing a record deal with French-based label, Listenable Records, in 2002. One year later HATE released their highly acclaimed album "Awakening of the liar" (2003), which is considered the essence of the band's early style. The material demonstrated so-called polish death metal at its best and gained the band rave reviews in the metal press. A year later HATE recorded their first official audio-visual material, a DVD titled "The Litanies of Satan", which had its worldwide premiere on Metal Mind Productions (2004). It was the moment when the band's style gained new musical characteristics and a kind of black metal vibe. This was fully developed on the next album "Anaclasis: A Haunting Gospel of Malice & Hatred" (2005), which no longer presented traditional death metal, but ingenious combination of death metal and black metal with distinct industrial influences. The album's fierce brutality and innovative approach constitued HATE's new style. "Anaclasis: A Haunting Gospel of Malice & Hatred" got great reviews in almost every metal magazine across Europe, and was highly acclaimed among metal fans.

In 2006 the band hit the road supporting Carpathian Forest and Keep of Kalessin on their European tour, and performed on a few prestigious live events such as Party.San Open Air and Winter Assault.
Supporting their countrymen Decapitated, the band once again went on a European raid, and soon there after, HATE invaded 10 major cities on their headlining tour in Russia. In January 2008 the next album "Morphosis" had its worldwide premiere, again on Listenable Records. It showed fast development of the band's style as well as the production part. The record was a logical follow-up to "Anaclasis: A Haunting Gospel of Malice & Hatred", but sounded more massive, varied and, again, innovative. This also marked the point in their career when HATE received offers to play at numerous festivals throughtout Europe, such as such as Metalcamp, Neurotic Death Fest, Brutal Assault, Screamfest, Metal Mean, Summer Breeze etc.

In May 2008, HATE recorded their first official video-clip for the song "Threnody" which was shot in a real coal mine in Silesia, Poland. The band hit the road again in February of 2009, and for the first time they were headlining a European tour on their own. The same year HATE also invaded Brazil to headline a few shows, and soon afterwords toured Europe again in company of Blood Red Throne. In november 2009, the band visited Mexico for the first time to headline 9 concerts. Throughout all that, the musicians already started writing new material which was planned to be recorded later the same year. In January 2010 the unstoppable force of HATE went on another rewarding tour, this time accompanying Incantation on a long series of shows across Europe. And only a few months later the band flew across the Atlantic to play their first ever US tour, supporting Hypocrisy and Scar Symmetry.

Just a few days after arriving back in Poland, the musicians entered Hertz Studio in Bialystok to start recording their next album titled "Erebos". This new masterpiece was completed in only five weeks time and promises to be the strongest HATE album thus far. Ferocious, challenging, complex, varied, innovative, and extremely well-produced "Erebos" is HATE in full-swing! The album is set to be released in Europe in November 2010, and in the USA in January 2011 as an extended version containing a few additional live tracks. Once again, supporting Decapitated, HATE will venture on a tour through Poland in October of 2010. In November, the band will tour Russia and Ukraine, and plans to return to North America in early 2011 are well under way. Until then prepare to HATE and "Taste My Blood From A Thousand Cuts"!

The majority of the material on this label is previously unreleased,
Original junglist hardcore dating back to 1991-1994 from producers who wish to remain anonymous.
A carload full of dubplates and DAT tapes full of unreleased material was handed over to the label at Sowerby bridge in Yorkshire sometime in 2008.
The material (several hundred original tracks) has been gradually catalogued, with a few tracks already planned for release this year. HATE is a Modern Love project and the label might also feature occasional new versions from different producers.
All HATE transmissions will be limited to 300 stamped copies.
This is the past coming to bit you on the ass!! Love to HATE.

4) The band was created about 2,5 years ago by James Alex and Oreman. Later Keroman came in as lead guitarist and Polo as bassist. After one year and half and some lives the line up changed. Keroman,Oreman,and Polo left the band. At that point john came in as guitarist. Not long after Chris (ex ratllehead guitarist) joined also as guitarist. We played for a while with no bass and during this period we wrote 2 songs.''your kingdom shall collapse'' and ''this is hate'' and played some more lives. ALSO during this time we finally formed our own musical style wich can be described as thrash with swedish death metal and hardcore elements. bill came to complete our line up. After that we wrote 3 more songs, and we sent a demo to schoolwave festival which was accepted and finally we re going to participate in schoolwave festival in 5th of july. Right now we finished recording our first demo which contain 6 songs and we are planning to play as many lives as possible during the summer.thats all for now.

Awakening Of The Liar