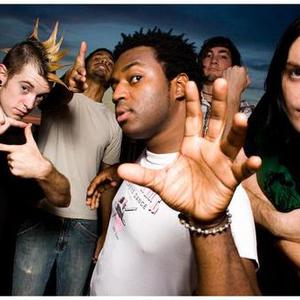 A faint sound was heard somewhere in Orlando, Florida not too long ago. It continued to grow until it was forced to be heard. This was the sound of five individuals creating something different. Something that had not been heard in such a manner. Blending elements of contemporary hardcore, rock and roll, and old school metal, Hand To Hand let go of the boundaries and limitations their previous efforts had placed on them, and played what was in their collective hearts.

With vocals that range from singing to screaming, the band disarms you with their melodic hooks, only to knock you down with brutal emotional breakdowns. But the band keeps growing, and at a spectacular rate. In little over a year, they have accomplished what most signed artists take years to achieve.

Hand To Hand's debut five song EP, "Fast Forward Your Thoughts" was a stunning introduction to their distinctive world. With Producer James Paul Wisner (Underoath, Further Seems Forever, 36 Crazy Fists) at the helm, the band created a record that held true to their beloved hardcore scene, and the rock world waiting to embrace them. Because Hand To Hand was able to garner the attention of LifeForce Records, they were given the opportunity to work with producer James Paul Wisner once again. This time, to record their critically acclaimed debut full length album ???A Perfect Way to Say Goodbye.???

With this release, Hand To Hand were able to debut as the fourth most added artist on the CMJ Loud Rock college charts. With steady and consistent college air play, Hand To Hand have been moving up the charts on some of the Nation???s largest College Radio stations including Seton Hall University in New Jersey.

The band has thus far spent their short life touring all over the South East, assaulting audiences with their intense live performance and packing key hometown venues such as The Hard Rock Live - Drawing 300+ devoted followers to each show. To anxiously support their new record, Hand To Hand have a busy year ahead of them including ten months of touring that includes over 5 weeks in Europe booked by Avocado Booking.

With their sophomore recording under their belt, a growing loyal fan base, a relentless dedication to getting out on the road, and the concrete support of their new record label LifeForce Records, Hand To Hand continues to leave a trail of bloody broken guitar strings and astonished spectators everywhere they go. They prove time and time again, that they can honor their past with no fear of the future.

A Perfect Way To Say Goodbye