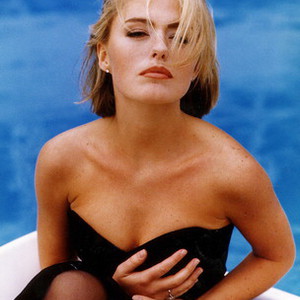 Eighth Wonder were formed in London in 1983 when Patsy Kensit, aged 14, volunteered herself for an audition for the vacant job of lead singer in her brother's band, then called Spice. The audition was a success and Patsy joined what was initially a line up consisting of Jamie Kensit; guitar, Geoff Beauchamp; guitar, Lawrence Lewis on bass, Jake Walters on drums and a friend called Nigel on percussion.

Musically it initially reflected the members interest in the white funk which was so popular in London clubs and venues at the time. Jamie and some of the band had been regulars at London's famous Le Beat Route and Wag clubs and were influenced by Haircut 100 and Stimulin.
During the summer they rehearsed and made their live debut in a club in a West London Suburb in early Autumn 1983. Through the rest of 1983 and the beginning of 1984 the band did more gigs in pubs and clubs all over the country and started to build up a following and attract some press attention.
During the late part of 1984 changes started to take place. Firstly, the band line-up changed, Nigel left and Alex Godson, a keyboard player, joined the band. Secondly Patsy started to take a major role in the group's songwriting with the other band members. Thirdly, the band's name was changed, after much deliberation, to Eigth Wonder (a song by the Sugar Hill Gang).

The first gig of Eighth Wonder with the new line-up was in november 1984, at Tiffany's in Wimbledon. Further London gigs followed over the Christmas period and considerable public, record company and media interest on the group built up.
One pre-xmas gig was attended by Steve Woolley, co-owner of Palace films, who was then casting for his second feature as producer, a musical version of Colin McInnes famous novel about London Youth culture in the late 50's, "Absolute Beginners". He was looking for someone to play the main female role of Crepe Suzette and had auditioned every young actress in London unsuccessfully. Patsy had been acting professionally since she was four, having made her young debut in 'The Great Gatsby' as screen daughter of Robert Redford and Mia Farrow. She had subsequently filled many roles in film, stage and television including stints with the Royal Shakespeare Company and film parts with Elizabeth Taylor and Ava Gardner. This record combined with what he had seen at the gig made him return with director Julian Temple to another gig and offer the part there and then, joining a cast of David Bowie, James Fox, Ray Davies, Sade and many other big names. He also asked the band to join some of these stars in contributing a song for the soundtrack.

By March 1985 nearly every major record label wanted to sign the band, and in April they signed to CBS Records and during the summer began recording in London,alternating sessions with Patsy's filming on "Absolute Beginners".
In October 1985, with the film completed, Eighth Wonder's first single 'Stay With Me', which was written by Patsy with Geoff Beauchamp and Alex Godson, was released. In Italy, after promotional visits to Milan and Rome, the record topped the charts in January 1986.
On April 4th "Absolute Beginners" opened in London, Patsy's appearance at the Royal Charity Premiere attended by Princess Anne, generated a huge amount of press, TV and media interest. The film went to No.1 on the Screen International box office charts for 3 weeks and achieved particular critical acclaim in the home of the musical film, Hollywood.

Later on that month Eighth Wonder Visted Japan for a highly successful promotional trip after which 'Stay With Me' hit the No.1 position in the Japanese charts and stayed there for several weeks.
In May the band appeared successfully at the Montreaux Festival in Switzerland. This was to be the band's last appearance as a six-piece. Shortly afterwards the band parted company with Lawrence Lewis and Jake Walters so becoming a four-piece.
In August 1986, they went to Los Angeles to record two tracks for an Album, with Mike Chapman producing, who was best known for his work with Blondie and as an ex-member of the highly successful Chinn and Chapman production team of the early 70's. Also while in L.A. many respected song-writers expressed an interest in working with the band and started to submit songs for the Album. Amoungst them was Dave Steart of the Eurythmics (although the song was eventually not used) and two songs from Billy Steinberg and Tom Kelly, writers of 'Like a Virgin' and 'True colours'.
In Autumn "Absoute Beginners" opened in other parts of Europe with Patsy making successful appearances at the San Sebastian Film Festival and at the Rome premiere.

In January 1987, one of teh Chapman-produced tracks 'Will You Remember' was released in the U.K. and Italy where it achieved No.7 in the charts after a show-stealing appearance in the world's most famous song festival, San Remo.
During the Spring the band achieved another International No.1 in Japan with the Chapman- produced track 'When the Phone stops Ringing'; written by Holly Knight and Bernie Taupin, Elton John's lyrcist. 'Will You Remember' was released as a follow-up achieving No.4 status.
To capitalise on this success the Japanese record company released a mini-album containing the singles and the B-sides with they called 'Brilliant Dreams', which sold 100,000 copies.

In April, the band resumed work on their album in London completing four tracks with Richard James Burgess, producing.
In September Patsy was a frequent visitor to Italy, taking part in two solo projects. One was the main female role in an Italian feature film starring Ben Gazzara about the life of Italian priest Don Boscoe, shot on location in Turin and in studios in Rome. The other was the recording in Milan of a duet with Eros Ramazzoti, the Italian singer songwriter, who is popular all over Europe. Patsy co-wrote the words to the song 'La Luce Buona Della Stelle', and it appeared on his multi-million selling album 'In Certi Momenti'. Patsy also appeared in a promotional video for the song with Eros and on several top European TV shows with him.

The rest of the year was spent with the band finishing their album in London with top Engineer and Mixer Pete Hammond taking over producion with the exception of one track 'I'm not Scared'; which was co-produced by the Pet Shop Boys and Phil Harding and written by Neil Tennant and Chris Lowe.
'I'm not Scared' was chosen as the next single and released all over Europe and was greeted with huge media and public enthusiasm everywhere, and at this time came the band's final change of line-up with Alex Godson departing and drummer Steve Grantley joining.
The record became a top 10 hit in almost every country in Europe, achieving No.1 in Italy, 3 in Spain, 2 in Switzerland and Portugal, 4 in Greece and 5 in Germany, with the band appearing on TV in many countries, including a return to San Remo to close the show.

In April 1988 Patsy took a break from record promotion to play the part of Linda Washbrrok in the film version of Alan Ayckbourn's highly successful comedy play 'A Chorus of Disapproval', directed by Michael Winner. The film was shot on location in Scarborough. The cast included Jeremy Irons, Anthony Hopkins, Alexandra Pigg, Prunella Scales, Richard Briers, Lionel Jeffries and Jenny Seagrove.
In May record promotion re-started with trips to Madrid, Bari, Munich and Juan-Les-Pains with the release of another single 'Cross My Heart' which proved to be successful chartwise internationally as 'I'm not Scared'.

Eighth Wonder's debut LP "Fearless" was released in July and by October and at the time of release of the next single 'Baby Baby' had achieved almost 500,000 sales internationally.
In November the band began their first World tour in Italy, augmented by additional musicians, Jingles on Bass Guitar, Michael Graves on Keyboards, Dashielle Rae and Rebecca Leigh-White as back vocalists.

After this the band's history slips into the dim and misty paths of the forgotten. Patsy has long since left the band and concentrated on acting and really wishes that none of it had ever happened.