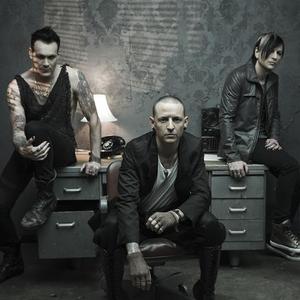 The writing of the album came to a halt when Bennington had to go back to writing Linkin Park's album "Minutes To Midnight". Ryan Shuck and Amir Derakh got Julien-K started with Elias Andra,Brandon Belsky, and Anthony "Fu" Valcic. Julien-K also performed on Linkin Park's tour "Projekt Revolution" in 2007 and after this Bennington and Linkin Park went on tour again in 2008 and 2009. In this time Bennington started to work on the Dead By Sunrise record with Julien-K. In 2009, they finally announced the name of the album is going to be called "Out Of Ashes" and during Linkin Park's tour Mike Shinoda of Linkin Park came up with the idea of letting Dead By Sunrise play three songs during five Linkin Park shows. In the summer Dead By Sunrise finally released the single "Crawl Back In" and released the album. Dead By Sunrise finally went on tour. This tour stretched from October 2009 to March 2010. While on the road Bennington continued working the new Linkin Park album and also while Dead By Sunrise was on tour Julien-K began writing their new album. This tour also brought Dead By Sunrise their second and third singles "Let Down' and "Inside of Me". Ryan Shuck and Derakh also announced they will be going on tour with their first band "Orgy' while also going on Tour with Julien-K, with Belsky and Andra. After Linkin Park tours and releases their album as well as Julien-K doing the same, Dead By Sunrise will make a new album and tour.