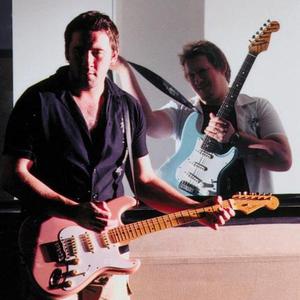 For over a decade The Nimmo Brothers, from Glasgow, Scotland have proven themselves to be one of the most respected exponents of modern blues the UK has seen since the blues boom of the 1960's. It is from this period, that brothers Stevie and Alan Nimmo first drew their influences, which makes them the fine musicians they are today. Inspired by such greats as Peter Green's Fleetwood Mac and John Mayall's Bluesbreakers they had no doubt that when the time came, they have produced original compositions fuelled by that very same passion for the blues shared by their idols.

They emerged firstly in the guise of The Blackwater Blues Band with the debut album ?Breaking out the Blues' showcasing an incredible energy and talent in ones so young, Alan was just 19 at the time!

1998 saw the first Nimmo Brothers album ?Moving On' with a more varied collection of songs than their previous offering, giving an insight into the strength and power of the Nimmo Brothers arrangements yet to come.

Come they did with ?Coming Your Way' marking the beginning of a hugely successful (and ongoing) relationship with Armadillo Music. Once again, this album not only captured the true spirit and energy that makes the Nimmo Brothers so special but also showed a level of song writing maturity. It was with this batch of songs that the Nimmo Brothers found themselves catapulted to the forefront of the British and European blues scenes ? winning best UK blues album and best UK blues band at the British blues connection awards 2002 - as well as headlining festivals and leaving sold out signs in the windows of clubs throughout the UK, Europe and the US.

In 2003 it was time for a change of pace and the brothers achieved this with their first acoustic album ?New Moon over Memphis', a beautiful and highly emotional recording which focused on the vocal and song writing talents of The Nimmo Brothers. When they first showcased this new material at the Low County Blues Bash in Charleston, South Carolina they were given two consecutive standing ovations by the public who were genuinely moved by the power and honesty of the songs they heard. One member of the audience was the US blues artist Debbie Davis who immediately invited the guys to join her on stage that night at her own show.

In 2006, after a period where the brothers had concentrated on various solo projects, Armadillo released the live album ?Live at Cottiers', recorded in 2003 in their home town of Glasgow. The Nimmo Brothers were back with a bombardment of new killer songs, touring the ?Live' album with dates in the UK, Ireland and Europe.

In 2009 through 2010 The Nimmo sound was stronger and more powerful than ever as they dusted down their orange valve amps and hauled out their treasured Les Pauls and Strats to promote the latest CD ?Picking up the Pieces' and once again become THE band to be reckoned with on the world blues scene. Joining Stevie and Alan were Matt Beable (Bass) and Craig Blundell (Drums). Musically stunning they still never fail to impress audience after audience with the show.

Picking Up The Pieces