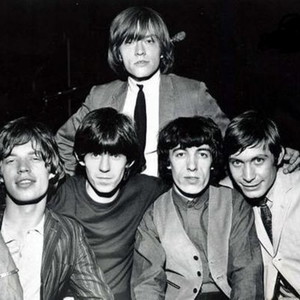 The Rolling Stones are an English rock group, formed in London in 1962. First popular in Europe, they quickly became successful in North America during the "British Invasion" of the mid 1960s. Since then, their worldwide sales are estimated at more than 200 million albums. In 1989, they were inducted into the Rock and Roll Hall of Fame, and in 2004, they ranked number 4 in Rolling Stone magazine's 100 Greatest Artists of All Time.

The group was formed by Brian Jones, Mick Jagger, Keith Richards and Ian Stewart, who met as schoolmates in Dartford, Kent. They took their name from a Muddy Waters song called "Rollin' Stone Blues", and made their live debut at London's Marquee Club (minus Bill Wyman and Charlie Watts). They start playing pubs and clubs around the city and suburbs. Bill Wyman joined later that year (the popular story is that he was asked because he had his own amplifier).

In January 1963, Charlie Watts joined the Stones. The band gigged constantly, with residencies at venues like Ealing Jazz Club, Ken Colyer's Studio 51, and Eel Pie Island in Twickenham. Their weekly performances at the Crawdaddy at Richmond's Station Hotel resulted in ecstatic press reviews, and in April Andrew Loog Oldham saw them there and signed them to his management company the next day. He started the "Would you let your daughter marry a Rolling Stone" press campaign, which set the tone for their career.

In May 1963, the Stones were signed to Decca Records by the same man who had turned down the Beatles. A month later "Come On", the first Rolling Stones single, was released, and reached number two in the U.K. charts.

The fifth member of the group, Brian Jones, left on 8th June 1969, saying that he wanted to form a new group. He was replaced by Mick Taylor, formerly in John Mayall's Bluesbreakers.

In 1971 the Stones, whose contract with Decca had expired, launched their Rolling Stones Records label. In December 1974 Taylor left the group in order to pursue a solo career. He was replaced in 1975 by Ronnie Wood.

Since Wyman left the Stones in 1993, the band has consisted of Jagger, Richards, Watts and guitarist Ronnie Wood. In studio and live performances, Darryl Jones (bassist) and Chuck Leavell (keyboardist) also serve as a regular contributors.

All the members have also undertaken solo projects of various kinds.

Living In A Ghost Town (CDS)