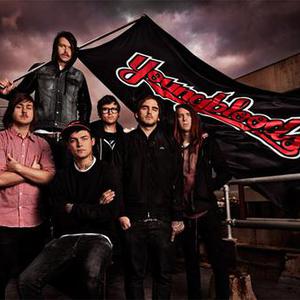 The Amity Affliction is a post-hardcore band originally from Gympie, Queensland. They have become one of the most well known hardcore bands in Australia through a strong touring ethic, a stunningly original sound and a commitment to creating a fun and exciting atmosphere within the scene. It seemingly took The Amity Affliction years to get their music together, releasing a demo in 2003 and a self-titled EP in 2004, but from the moment they released their High Hopes EP in 2007, the touring rampage began.

It seemingly took The Amity Affliction years to get their music together, releasing a demo in 2003 and a self-titled EP in 2004, but from the moment they released their High Hopes EP in 2007, the touring rampage began. In no time, The Amity Affliction was a household name amongst the hardcore community of Australia. Their mixture of metallic riffage, rock swagger and sing/scream vocal attacks made its mark on all who got in their way.

But it's not just their music that people have taken notice of ? Amity (as they are affectionately known) have an attitude and aura about their music and actions that has helped propel them even faster to the forefront of the scene. Fans come to their shows expecting flat out fun and excitement ? the members always committing to making the party after the show as intense as the performance itself. The sing-along chants don't end when the band gets off stage, and fans don't leave after they play. With members involved in putting on punk rock clubs, music magazines, graffiti magazines, graphic design companies and online blogs that are well known throughout the country, Amity and it's members are well ingrained into the culture and ethic of Australian hardcore culture.

?Severed Ties' was recorded in July and August of 2008, a grueling cross-country marathon of a record, recorded in Adelaide, Melbourne and Brisbane to get the best results. With guest vocals from JJ Peters (Deez Nuts, I Killed The Prom Queen), Michael Crafter (I Killed the Prom Queen, Carpathian, Confession), Matthew Wright (The Getaway Plan) and Helmet (The Daylight Curse), and production with Adelaide's Darren Thompson, the 11 track full length was released in October 2008.

Severed Ties debuted at #26 on the Australian Charts and solidified The Amity Affliction as one of the most popular "heavy" bands in Australia. Triple J's national radio show "Short Fast Loud" had Severed Ties as #2 on their best albums of 2008, and popular punk site "KillYourStereo.com" listed it as #1.

In mid 2010 the band released their sophmore record 'Youngbloods'. The album debuted at #6 on the ARIA charts and has since gained significant recognition with the album constantly being voted #1 for 2010 by the public and recognized magazines alike, beating out Parkway Drive's 'Deep Blue' on many occasions. The album saw Amity's popularity sky rocket as the band has since done a sold-out national tour, tour the UK,US and Europe as well as playing the Soundwave Festival. The band is set to go on their largest tour to date with the Destroy Music Tour during May.

In October, The Amity Affliction set out on a new Australian tour with support from Asking Alexandria and Skyway! the "Fuck the Reaper" tour sold out in Brisbane, Sydney and Melbourne. starting 2012 off with a bang, The Amity Affliction toured the 2012 Big Day Out, with fellow label mates and good friends The Getaway Plan, before touring America alongside Asking Alexanrdia, Trivium and may others on the "Still Reckless Tour"

Now entering the studio in Orlando to record their third release, at this point there has been no mention of a name for the album, or artwork. with the band releasing very short teasers along with footage of the band partying and being joined by Letlive at Universal Studios. With the new album set for release mid to late 2012, hopes are high for another smash album and tours

Somewhere Beyond The Blue (EP)

Everyone Loves You... Once You Leave Them

This Could Be Heartbreak

I Bring The Weather With Me (CDS)

Let The Ocean Take Me