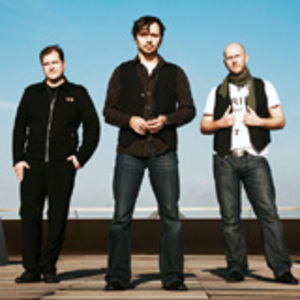 Sono is a name of at least two acts: 1) A group with members Lennart A. Salomon, Florian Sikorski, and Martin Weiland polish synthie pop until it gleams, sprucing it up for the third millennium. In their Hamburg studio, where international mainstream hits are usually mixed, forthright megalomania is the gas pedal and false modesty the brake. Why? For pop to sound great, it has to be thought of on a grand scale.

1) A group with members Lennart A. Salomon, Florian Sikorski, and Martin Weiland polish synthie pop until it gleams, sprucing it up for the third millennium. In their Hamburg studio, where international mainstream hits are usually mixed, forthright megalomania is the gas pedal and false modesty the brake. Why? For pop to sound great, it has to be thought of on a grand scale.

If music is also supposed to be understood as language, then Sono speaks Esperanto. In German Sono simply means ?Klang? (sound, tone) ? perhaps only an onomatopoeic coincidence, but perhaps also a promise. Esperanto, that strange and visionary language, is comprised of simple words, whose origins seem familiar and whose meaning one can also intuitively deduce without an exact translation. With Sono's music, the case is quite similar. Regardless of which musical mother tongue one feels committed to, Sono's vocabulary of electronic pop music is so elementary and clear that difficulties in understanding are as good as ruled out. Their full, high-resolution, megalomaniacally perfected sound even provides inveterate electronics dyslexics with a serious aha-experience and lovers of electronic music with the suspicion that it has to be an English production. There's no question that the band that calls itself ?Klang? lives up to its name.

So that you don't get the wrong idea: The three guys from the coast are anything but big talkers causing a stir while having grand pop dreams. In their work, they have six legs rooted to the ground ? real realists who know what they are capable of. And whoever has already seen one of their videos, was probably also convinced by their healthy dose of self-irony. And right when it's needed they don't hesitate to conjure up the big clunker from pop's treasure-trove: feeling, soul, and messages that can't be misinterpreted. Despite the dense structures of their songs, a charming fluffiness predominates, which itself envelops very hard, bouncing electro beats in fleecy clouds and robs heavily sweet melodies of their emotionalism. A cool sensuality shimmers in Lennart's singing, which he is above all completely able to develop with all the time in the world in the peaceful songs. Without toying around, he plays with the boyish timbre of his voice, which can be as seductive as the soft, cold glaze of a bar of white chocolate just out of the refrigerator. Despite classical songwriting, Sono resists every retrogressive retro aesthetic. Instead it orchestrates its version of synthie pop with hypermodern worlds of sound into a corset-free style, which unpretentiously makes its contribution to the current state of musical affairs.

Sono has worked together as a band for three years now and feels a bit overwhelmed by its quick success. In the beginning the group had to shop around for a label like all other no-name bands, but in the end was able to conclude a contract with a major label, Polydor. And not only did their first single ?Keep Control? become a surprise hit in Germany, but it also spent an entire six weeks on the U.S. Billboard Dance Charts, where in 2001, it was the very first German hit to be selected title of the year. Various colleagues like Trooper Da Don, Guano Apes, and Justus K?hncke declare themselves fans, while others like Fischerspooner, Rammstein, and Timo Maas commission them to do remixes. With its first album ?Solid State,? Sono opens the way to new audiences which is even a surprise for them ? the long player is not only well received by the dance and pop scene but by the gothic scene as well and strengthens the band's claim to produce work that is not restricted to a certain genre and that opens the way to new territories.

As for the word ?band? ? when did we actually stop using this term in conjunction with musicians who primarily produce electronic music? Is rock = band, pop = group, dance = act a formula that we have to accept? In any case Sono sees itself as a band and for good reason. That at the start of the third millennium their story does not perhaps entirely correspond with the typical rehearsal room story is more a sign of the times. One can hardly reproach the three pros from having found one another. Florian Sikorski and Martin Weiland have been working together on their own musical ideas since 1995. Florian is a sound engineer who is in demand worldwide; with ?Maratone Music? he runs his own studio. Martin works for a dance label and has for many years been a well-known DJ especially in clubs in Hamburg. Lennart A. Salomon was the singer and drummer in various rock, jazz, and funk bands until in 2001, at a friend's suggestion, he met up with his two comrades-in-arms, who were looking for the right voice for their potential hit ?Keep Control?. On meeting in Florian's studio, it is immediately apparent to everyone that from now on they are going to proceed together ? as Sono, as a band. A band does not get that extra something from the external constraints alone but also from that which determines its internal makeup. It is about how the band members relate to one another and the ability to combine the members' various strengths in a way such that a shared musical vision comes into being, which at its best leads to something greater than the sum of the various parts. Florian and Martin develop sounds and beats and coordinate them with Lennart's songwriting; the three then work together on the arrangement. From the start, Lennart also prepared the band for stage concerts, making sure that their songs could be played live with bass, percussion, and guitar. Lennart is the band's incorrigible stage fiend, which he also proves with his funky solo-freestyle-alter-ego Jerobeam (Hazelwood). It's no wonder that Bristol's drum'n'bass rule-breaker Kosheen saw Sono as their soul brothers, making them the first band they committed to a joint tour ? it was the band's personal highlight for 2002. Left empty-handed were St. Etienne, Underworld, and Soft Cell, who also wanted to have Sono as their tour partner.

Neither the fans nor Sono themselves would have guessed that after so much ?over the top? a period of three years of complete silence would follow. The work on the new album was progressing efficiently, however, several label managers from their former label wouldn't give the go-ahead for its release. After almost two years of patient negotiations a termination of the contract between Sono and the major label was decided. It took another year until the band finally found a new home at the European indie label PIAS Recordings. Though there haven't been any releases in the meantime, Sono has been anything than idle: among countless live shows the band consistently got together in the studio to work on new songs as well as on remixes for other artists, e.g. for Kelly Osbournes ?One Word?. And they were better off that way as they now, 2005, are daring to go all the way: their first little ?comeback? in a short but fierce band history.

The forerunner for Sono's full length album will be the single ?A New Cage?, a song that shows the band's musical enhancements: deep and catchy melodies that ? almost like a seam ? are keeping together the patchwork-like structures of unusual freethinking loops and samples, plus a melancholic but not dismal chorus that will make you doubt if the moon is going to rise or fall. The remix of Sono's Hamburg-based fellows ?Digitalism? adds tinny basses to the song, whereas Justus K?hncke, an exceptional artist from Cologne, distinctly tightens the pace which should cause some euphoric moments on the dancefloors.

Sono's new album bears the witted title ?Off?, and it communicates stronger than ever their identity as a band. The constructions have become more complex without being complicated, the songwriting more ambitious ? probably even darker ? without being too top-heavy. The guitar is smoothly fitting in the family of electronic instruments, which stylishly complements the familiar Sono-sound and especially during live shows underlines the band's new versatility. And no one should be scared of this new versatility, as Sono has developed without covering their tracks; far from it: songs like ?Heroes?, ?A New Cage?, ?Open The Door? or ?I Know? are tied with a thread that has been kept yarning to the finest dancepop-twine. But Sono also copes with the material handkerchiefs are made of: for ballads like ?Miles Away?, ?Disappeared? or ?Where Are You Now? you should have them within reach. And the experimentation with new patterns for songs as ?Dangerous?, ?Whatever? or ?Technicolor Dreamgirl? is relieving in all respects. Why not just listen naked?

2) A side project of prolific acoustic/electronic musician Keith Kenniff (AKA Helios, Goldmund) is a contemporary jazz sextet featuring Kenniff's twin brother on double bass. Their only release to date is 'Hyperballad', a professionally-recorded live performance of Bjork's classic track 'Hyperballad' and Jim Black's jazz-rock masterpiece 'Part Wolf. It was released as an ultra-limited edition 10" on Yesternow Recordings.