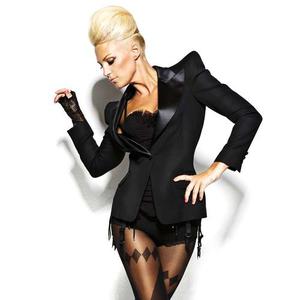 Kate Ryan (born Katrien Verbeeck on July 22, 1980) is a Belgian World Music Award winner. She began her singing career in 2001 and represented Belgium in the Eurovision Song Contest 2006 with "Je t'adore" coming in 12th place in the semi-final. Ryan was born in the small village of Tessenderlo, Belgium. She grew up in a musical family, and had talent for music at a very early age. At eight years of age she had learned to play the piano and guitar. She had singing and piano lessons from her aunt who teaches at a conservatory, but had other interests too.

Ryan was born in the small village of Tessenderlo, Belgium. She grew up in a musical family, and had talent for music at a very early age. At eight years of age she had learned to play the piano and guitar. She had singing and piano lessons from her aunt who teaches at a conservatory, but had other interests too. She studied at an art school, specializing in jewelry design. She also lived some time in Meerhout, a small village near Tessenderlo.

Ryan played frequently in bars and caf?s as a teenager, and one night a manager approached her, wanting her to record a song in a studio. She became a member of a pop group called Melt at the age of 16. The group was active for two years, but they did not release any material commercially. When she met with producer Andy Janssens, she left Melt and the pair began to write music together. Their debut single "Scream For More" was released in 2001, and it became an unexpected chart success.

She gained international prominence with a cover of Myl?ne Farmer's "D?senchant?e", which was a hit on various European pop music charts. She signed with EMI Belgium and released her first album Different in 2002 exclusively in Europe. The album went Gold, selling more than 250,000 copies throughout Europe.

It became popular enough in the States that music consumers who favour dance-pop with a European flavour bought Different even though it was only available as an import title. Kate's Stateside debut single was "Scream For More", released July 17, 2001, on Robbins Entertainment. It did well on dance?music radio and in nightclubs. The follow?up single, "Desenchantee/U R My Love" also released on Robbins, did as well on dance radio and in nightclubs, but the single sold more than the previous single.

In 2004, Ryan released a second album in Europe and in North America in 2005 on Water Music Records, the album named Stronger, with two more popular songs?"Another Day" and "The Rain" which were rumored to have been inspired by the twilight series. While the album did well on the dance charts, it failed to chart on the pop charts because of poor promotion.

In 2006 she participated in Eurosong '06, the national final to select the entrant for Belgium in the Eurovision Song Contest 2006. She was selected as the entrant after placing first in the Eurosong final on March 9, 2006. Ryan represented Belgium at the Eurovision semifinal held on May 18, 2006 in Athens singing "Je t'adore". She did not qualify for the final, however, finishing two places outside the advancing Top 10 (12th) with 69 points.

It was announced on the August 14, 2006 that Ryan would release "Je t'adore" in the UK for which exclusive mixes by Credheadz were commissioned, but the release was shelved, close to the release date. It did however enjoy heavy rotation on the UK's music channels, and is still played regularly on Flaunt.

The following single was "Alive", taken from the album of the same name, which also features French versions of several tracks including "Je t'adore", "Alive", and the third single "All For You".

In 2007, she had some success with the double sided single "Voyage Voyage"/"We All Belong". The track "Voyage, Voyage" is a cover of the 1987 European smash hit by Desireless, and "We All Belong" was selected as the official anthem for the Eurogames 2007 in Antwerp.

In 2008, she released two singles: "L.I.L.Y. (Like I Love You)" and then "Ella, Elle L'a", a cover of France Gall's song. Both tracks (and Voyage Voyage) were included on her album Free, which was released on May 30, 2008. The album also contains a duet with Spanish singer Soraya Arnelas.

On July 11, 2008, a best-of-album with the title Essential was released. It includes songs which were released by Ryan's former label EMI.

On August 8, 2008 Kate took part in the Polish Sopot Hit Festival. During the show she received the Gold album for selling over 10,000 copies of Free in Poland. This is her first certification for this album in Europe.
On November 9, 2008 in Monaco Kate Ryan won the prestigious World Music Award for The Best Selling Benelux Artist.
In 2009, Ryan released the concept album "French Connection" which was an album of all her French language songs, covers and previously unreleased songs in the language.

After several delays, Ryan's fifth album "Electroshock" will be released on June 25, 2012. The album was preceeded by the hit singles "Lovelife", "Broken" and "Robots."

La Promesse (The Promise You Made) (MCD)

Only If I (Single)