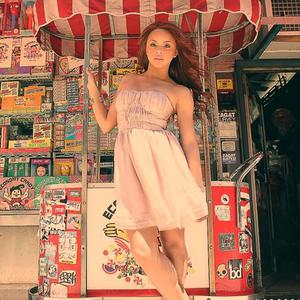 Alexis Jordan (born April 7, 1992) is an American singer-songwriter and actress from Columbia, South Carolina, United States. The Happiness Songfacts reports that Jordan's father is of Puerto Rican heritage and her mother has African American, Native American and European ancestry. Alexis' family relocated to Santa Clarita, California when she was 11, which is when she began writing songs to accompany her singing ability.

Her big break came in 2006, when aged 14 Jordan rose to fame as a contestant on the first season of America's Got Talent in 2006. After being eliminated from the show, she began to upload cover songs on YouTube, of which received millions of views. The exposure led Jordan to the attention of production team Stargate and rapper Jay-Z, who both went on to sign her to their label, StarRoc/Roc Nation.

Jordan's debut single Happiness was released on September 7, 2010. The song was written by deadmau5, Autumn Rowe, Tor Erik Hermansen and Mikkel S. Eriksen, with the latter two also handling its production. In the United States, Happiness reached the top of the U.S Hot Dance Club Songs and Hot Dance Airplay charts. It also charted in the top five in the United Kingdom, and Australia, where it certified platinum by the Australian Recording Industry Association.