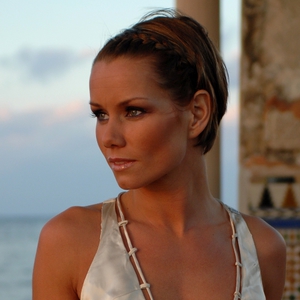 Linda Bengtzing is a Swedish pop singer, famous for her participation in the fourth season of Fame Factory in Sweden and for her entries at Melodifestivalen 2005, 2006, 2008 and 2011. Linda Bengtzing (born March 13, 1974) grew up in Gullsp?ng, a little village in V?stra G?taland located in the west of Sweden). She released two singles in 1987 and 1989, however, she disappeared from the music industry for fifteen years.

In 2004 Linda took part in the fourth and the final season of Fame Factory but she went
on the program at the same time as her song "Alla flickor" (All girls) being
selected to participate at Melodifestivalen 2005. Her song surprised everyone and she
took part in the Melodifestivalen final after receiving sufficient votes in the
'Andra Chansen' (Second Chance) round. She finished in last place, scoring 15
jury points but receiving 0 points from the Swedish public's televoting. The single
reached #8 in the Swedish charts and a few months "Diamanter", a song very
similar to Alla flickor, reached #32.
One year later she appeared again in Melodifestivalen. Her song, "Jag ljuger s?
bra", written first for Jessica Andersson, finished in the top two of the first heat
and, therefore, was entered into the final. Linda's song came seventh out of 10 in
the final in Stockholm's Globen. Whilst Linda may not have received many votes from
the public the single rose to #2 in the Swedish charts, making it her greatest hit.
Days before the Melodifestivalen 2006 final, she released her first album,
"Ingenting att f?rlora" (#4) and months later the second single from the
album, "Kan du se" debuted at #7, though did not chart the next week.
In 2007 she released a new single, "V?rsta schlagern", a parody on tradition
Melodifestivalen entries. The song is rumoured to have been entered into Melodifestivalen
2007 but was not selected as one of the 32 songs to compete for the title in the live
shows. The song is a duet together with Markoolio. Linda participated at Melodifestivalen
2008, competing in Heat 4 (Karlskrona) on the 1 March 2008, where she directly qualified
for the final round. She went on to finish fith out of ten in the final, with 64 points
from the juries but nothing from the public. The song was composed by Johan Fransson, Tim
Larsson, Tobias Lundgren and is called Hur sv?rt kan det va? (How hard can it be?)[1].
Linda released her second album on the 19 February 2008, 4 days after the
Melodifestivalen final. It has been reported that Linda's record company (Mariann
Records) would not allow Linda to release her second album unless she entered
Melodifestivalen 2008.