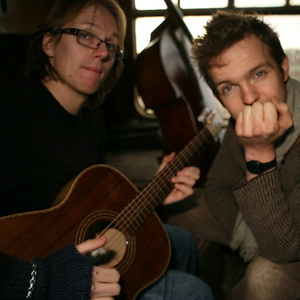 Nizlopi were a British two man band from Leamington Spa, UK with Luke Concannon (vocals, guitar, bodhran) and John Parker (double bass, beatbox, guitar, backing vocals). They were initially friends who've been writing and playing music together since their early teens. They take their band name from a Hungarian girl that Luke had a crush on at school. Nizlopi gigged relentlessly since the start of the 21st century.

Nizlopi gigged relentlessly since the start of the 21st century. They are renowned for crowd involvement at their gigs, giving an energetic performance. Often improvising, inviting people up on stage to sing and dance or unplugging and going into the crowd. They took part in 'Healthy Concerts' or 'gigs in digs' where artists play in someone's house.

They have been on tour with, and shared gigs and stages with a diverse range of artists. They have toured the UK and Europe with Jamie Cullum, joined Christina Aguilera for two nights at Wembley Arena, toured Ireland with Damien Dempsey, opened Gigbeth festival with Mr Hudson and The Library, duetted with Billy Bragg at the Hackney Empire, and been supported at headline shows by Newton Faulkner and Duke Special amongst others. The band have been able to take in a great number of esteemed venues, headlining shows at the Shepherd's Bush Empire and at Indigo2 at the 02 Arena (formerly the Millenium Dome. They are also popular regulars on the festival circuit, having performed to crowds for years at Glastonbury Festival, Wireless Festival, Ireland's Fleadh, and Cambridge Folk Festival to name just a few.

At the end of 2005, Nizlopi's hit "JCB Song," which topped the charts for five consecutive weeks giving them a Gold Single in the UK and a Double Platinum Single in Ireland. Both the single and video have spent time at #1 on iTunes in the UK and Europe, with 100,000 plus downloads and 1,000 full track downloads to cell phones in one week. The award-winning video for "JCB Song" was Top 5 on both the UK TV Airplay Chart and the MTV Most Played Chart.

A mini-EP containing six songs and titled ExtraOrdinary, was released on 4 September 2006. The six tracks included two that had been released before ? "Helen" and "Yesterday" which were previously released on the JCB and Girls EPs respectively. The record is an attempt to strip down the orchestral production of their early work to represent the duo's vibrant live sound.

The second album from Nizlopi was released on 31 March 2008. The album was recorded with producer Phil Brown who had formerly produced artists such as Bob Marley. The album was recorded on 2-inch tape, a traditional style of recording said to create a more 'raw' sound that is popular with musicians preceding the era of digital recording technology. The album includes Martyn Barker (percussion/drums), Andy Simms (piano), Jonnie Fielding (violin), Jack Hobbs (vocal/scratching), Rory Simmons (trumpet), Kadially Kouyate (kors & Senegalese vocals), The Individuals Dedicated to the Ministry of Christ choir and a contribution by the poet Benjamin Zephaniah.

The release of a new album, Make It Happen, was preceded on 17 March 2008 by a digital single, "Start Beginning". In November 2008 they completed a tour entitled 'last nights on tour.' They announced using both the official website and the myspace that they would be taking a year out in 2009 and would meet while travelling in Cuba to discuss the band.

On 10 February 2010 an e-mail was sent out to all mailing list subscribers confirming that the band had split up after being together for 17 years. Luke Concannon stated "And that after many wild meanderings and much confusion I feel I must go on, on my own from here. That my dream is now to do another project, not Nizlopi, and to build a new life. So.this is good bye from Nizlopi. We are no more! Wow, there you go I said it. Scary as it is."

Nizlopi's aim of trying break down the barriers between performers and the audiences by heading down into the crowd to play acoustically became well known.

Half These Songs Are About You