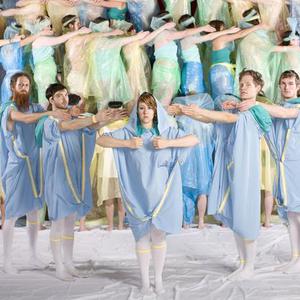 Architecture in Helsinki rose from the ashes of the High School band of cameron bird, Jamie Mildren and Sam Perry. Bird started writing songs at the turn of the century and convinced Perry and Mildren to help him flesh out his first set for live performance. Bird urgently needed a name for the band, so, he circled some words in a copy of The Age newspaper and did some magnetic poetry. In mid 2000 Bird met Kellie Sutherland at a party, she volunteered her musical services to the band at first playing clarinet. By the time Bird met James Cecil, Gus Franklin, Isobel Knowles & Tara Shackell whilst studying at RMIT University later that year, the band was well and truly taking shape.


Fingers Crossed (2002-2004)
After many discarded recording sessions and countless shows at North Fitzroy's Empress Hotel, the band locked down in their home studios for the best part of 2002 to make their debut album. The vast majority of the songs were written by Bird the week he returned from an extended holiday in the Pacific Northwest. Arrangements and production were labored over by the band in myriad of locations in and around their home town of Melbourne. Trifekta Records signed the band and released the record in February 2003. It wasn't released in the U.S. until March 2004 on Bar-None Records.

In Case We Die (2004-2006)
The band and associates leased a giant garage space in Melbourne's East Brunswick to record their Sophomore record. Work began on the record in June 2004 and Bird and Cecil worked day and night for 5 months on the production, enlisting dozens of guests to play on the record. Songs were primarily composed in the studio with Bird acting as some sort of mad professor with inter-band chemistry. In November, Tony Espie was hired In a bid to tame the record at the mixing desk. The band fell in love with his mixing style and studio demeanor when he worked on 'Do The Whirlwind', the record's lead single. The record was released in February 2005 in Australia on the band's own Tailem Bend imprint. Bar None Records released it in April 2005. It was the bands first release in Europe coming out in July 2005 on Moshi Moshi Records. In Mid 2006, the band released a remix album entitled 'We Died, They Remixed' which featured a collection of their friends and contemporaries re-interpreting the songs of 'In Case We Die', This included Hot Chip, YACHT, New Buffalo, Mocky, Dat Politics, DJ Mehdi, Safety Scissors and Qua.


Places Like This (2006-2007)
At the end of touring In Case We Die in April 2006, Isobel Knowles and Tara Shackell left the band citing 'creative differences'. Bird decided to move to New York City to write for the third Architecture in Helsinki record. He demoed the songs in an apartment in South Williamsburg and worked on arrangements with the rest of the band via email and instant messaging conversations. In September 2006, the band convened in Los Angeles to play the songs for the first time. After a week of jamming they headed out on tour in support of Brooklyn band, Clap Your Hands Say Yeah, to road test the new songs. To coincide with the end of the tour the band booked studio time at Stay Gold in Brooklyn with Engineer Chris Coady. The basic tracks were laid in the Stay Gold sessions in order to capture the energy of the band hot on the heels of the 25 show tour. The session was deemed a success, so Coady flew to Sydney's BJB Studios in December 2006 to finish the record. Bird and Coady put the finishing touches on the record back in New York in January 2007. The first single, Heart It Races, was released in May 2007. The album was released worldwide in July 2007.

Moment Bends (2008-2011)
After a few years of relentless touring. The band, now a 5 piece after the departure of Cecil, reconvened in Melbourne and set about the process of making a new record at a pace that was conducive to quality not insanity. They rented a space in East Brunswick which they set about renovating to better resemble a functional recording space. A giant photo mural of Lindsey Buckingham was erected on the studio wall to oversee proceedings and act as an inspiration for the record. The studio was named Buckingham Palace and the project was given the working title 'Vision Revision'. Longtime collaborator Francois Tetaz was brought in as producer, a move that instantly allowed the group to focus more on songwriting and ideas. The first fruits of this new endeavor came in November 2008 in the form of 'That Beep', the band's most accessible and commercially successful release to date. Meanwhile, back at Buckingham Palace, Moment Bends was beginning to take shape. The band had Engineer and Auxiliary member, Haima Marriott, working around the clock for the best part of 18 months between touring and various trips into Inspiration Hiatus. The songs were much more detailed and focused, the band was said to have searched for it's essence. On January 31 2011, It was announced that 'Moment Bends' would finally see the light of day in April 2011, almost 4 years after the release of 'Places Like This'.

The band have be known to DJ regularly, supporting acts such as Yacht & Hot Chip and throwing their own party called 'Eye Do' on New Year's eve 2009 in Melbourne. They also curated a DJ stage at Laneway Festival in Australia in 2011.

We Died, They Remixed

In Case We Die