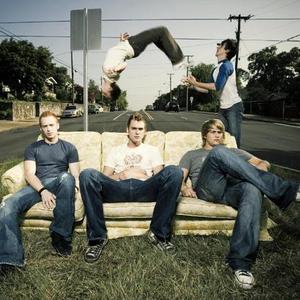 The sound of MIKESCHAIR demands attention. The strong delivery of their self-titled album on CURB Records sets out to entertain as well as inspire those who listen. Their unique pop sound mixed with rock guitars, electronic textures, and bass grooves blended with catchy, anthemic, sing-along choruses compel you to step up emotionally and spiritually. The music inspires action to change the world through love.

Not only does the sound demand attention, but so do the remarkable individuals of the four-man outfit that make up MIKESCHAIR. Mike Grayson first found his passion for music while in sixth grade and continued to grow this passion throughout high school. He tied together this love of music with his faith as a youth worship leader in his church. Sam Tinnesz has dreamed of music his whole life. Through self-discipline and practice, he developed his skills on guitar, leading him to perform with many rock bands over the years before finding a home with MIKESCHAIR. Jesse Hale began classical violin training at four-years-old and has maintained his enthusiasm for music ever since. Using his well-trained ear, he's been able to pick up several other instruments including keys, synths and programming ? thereby becoming the band's ?utility guy?. Jon Haire picked up his first bass in seventh grade and hasn't put it down ever since. His desire to mix his aspirations for music and performance has proven to be an essential element to the makeup of MIKESCHAIR.

The providence and origin of MIKESCHAIR was set in a freshman guy's dorm room one night in Pembroke Hall 106 at Belmont University in Nashville, TN. Mike and a friend were writing a song when Jesse, who had moved into the room across the hall, knocked, introduced himself, and asked if he could bring his violin over to join.

?We were a little nervous because violinists are either really good or really not good,? says Mike, laughing, ?But he started playing and it was amazing!?

A short time later, the scenario repeated itself as Sam happened to walk past when Mike and Jesse were recording the song they'd been writing. After the addition of Sam, all that was needed was a bassist. The guys reached out through a friend and brought in Jon to round out the group.

The name, MIKESCHAIR, piques a lot of interest and begs for an explanation. ?The 'chair' was the central gathering point where we got our start,? says Sam. ?All of us lived on the same floor of our dorm at Belmont, except for Mike. But, since he was always hanging out with us on our floor, we decided to get him piece of furniture to make him feel a little more at home. The chair was his only piece of property on our floor. He wrote his name on it in big capital letters, and it kind of became his seat of inspiration for writing songs and being creative. The name is a reminder of our humble beginnings and how far God has brought us.?

Moving from dorm room practices to the public stage happened fairly quickly when the guys decided, on a whim, to submit an application and demo for Belmont's Christian Music Showcase. Though typically, bands composed entirely of freshmen almost never made the cut, to their surprise, they earned the invitation to perform after an extensive auditioning process. The guys rapidly worked up a set of original material and made their public debut as a band just two weeks later.

?We were so new,? Jon says. ?We barely knew each other. There was even a moment when I looked across the stage at Jesse and realized that I couldn't remember his name.?

Mike adds, ?It was undeniable. Though it all seemed so random at the time, how we all came together, but it is obvious now that we were hand-picked for this.?

After a successful showcase, the guys began to use every available weekend, spring break, holiday, and vacation to perform. Sometimes they would have to drive through the night just to make it to their 8 AM classes the following day. It was the fall of their senior year when the guys were signed and added to the well-respected CURB Records roster. Equally important, they chose to stay in school, graduating together in 2007 and earning their degrees from the Curb College of Entertainment and Music Business at Belmont.

?Looking back, Belmont has been very instrumental in creating opportunities and connections that we may never have had,? says Jon.

Since signing with their label, MIKESCHAIR plunged full-time into touring and developing new material. They have continued to play as many shows as their schedule allows, opening for acts such as Jeremy Camp, Jars of Clay, MercyMe, and Brandon Heath along the way. In addition to touring, MIKESCHAIR also recently completed their first official album with award-winning co-producers Jason Ingram and Rusty Varenkamp (Bebo Norman, Rush of Fools, Tenth Avenue North). The results of their collaborative efforts with Ingram and Varenkamp on MIKESCHAIR's self-titled album more than meet the measure of a strong debut in any genre. Notable songs on the album are the debut single, ?Can't Take Away,? and crowd pleasers like ?Let the Waters Rise? and ?Keep Changing the World.? Their self-titled debut finds the right balance of service, worship, entertainment and brilliance.

?The music isn't the full extent of our purpose,? adds Jesse. ?We are committing our time, effort and platform to helping those in need -- making ourselves available to be the hands and feet of Jesus. We have a dedicated table at our shows called ?mikestable;? where everyone is welcomed and encouraged to step up and join with us and our partners ? Food for the Hungry, IJM and Love 146 ? to make a difference in this world. There's something more here than just music; we're presenting something that's very precious to audiences and listeners. It's the Gospel in action.?

This adventure may seem like it's just getting started, but it's been underway for a few years now. As MIKESCHAIR walks out obediently in faith, they look forward with anticipation to take hold of the next chapter. Mike shares, ?Our prayer is that people will leave our shows, not with a sense of how awesome the music is, but with a deeper sense of searching and begin asking questions that they weren't asking when they showed up.?