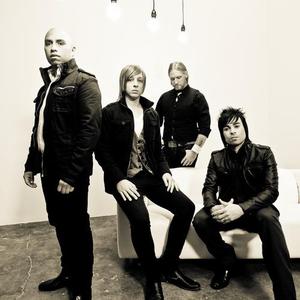 In the four years since Circleslide released its critically lauded debut disc Uncommon Days, which landed on Christianity Today's Year in Review ?Best-of? round-up, the band has toured unceasingly, refining their modern rock ruminations, while keeping their ministry agenda firmly in focus. In addition to shows with Newsboys, TobyMac, MercyMe, Casting Crowns, Salvador, Jaci Velasquez and Downhere, the Nashville-based band has headlined everything from clubs to churches and colleges...

?Throughout all the traveling, the goal has always been to make music that would inspire people, touch hearts and lead them to Christ,? asserts front man Gabe Martinez. ?Our new CD, Echoes of the Light, continues in that tradition, but it also draws from things that God has been teaching us through some of our recent experiences.?

The rockers have done much serious soul searching this past year as they encountered a series of obstacles that would have caused many to doubt their convictions. In between Circleslide's freshman and latest effort, its members have experienced the destruction of their home and almost all of their music equipment in the historic 2010 Nashville flood, emergency surgery for lead vocalist Gabe Martinez, frightening health reports from loved ones, the tragic death of a dear friend's 10-year-old daughter, and more.

The flood, which occurred while Martinez and his wife were out of town, destroyed their house, as well as all of their instruments, gear, PA and trailer. ?A good friend who was staying at our house waded through five feet of water to save some vintage guitars, but other than that, we had to completely rebuild from scratch,? says Martinez. ?The Nashville community really came together, though. Thanks to amazing organizations like MusiCares and Porter's Call in Nashville, we've been able to replace our music gear and we have a renewed realization that God has called us to this ministry. Nothing's going to hold us back from spreading His word.?

In fact, Circleslide's ordeals have been followed by a season of spiritual assurance, which directly inspired the band's recent songwriting process and the new CD's name, Echoes of the Light. ?Many friends asked us if we ever thought we were supposed to quit and we just never saw it that way,? continues Martinez. ?The album title was inspired by the act of God speaking and saying ?Let there be light' and the fact that we as believers are supposed to be reflections of that light. I'll be the first to admit that I don't always shine as brightly as I'm supposed to, especially in light of the sadness that we've experienced personally. Echoes of the Light is a comment on the human condition and draws from examples of people we know and people in the Bible who inspire us to keep going.?

As for the soundtrack in which these themes are conveyed, the band has evolved sonically since the last project and there's an increased continuity that comes from producer and fellow Save the City labelmate Brandon Bee (Stacie Orrico, Lanae Hale, Benjiman). Expect shades of anthemic alternative acts like Arcade Fire and The Flaming Lips, crossed with the edge of Kings of Leon and the envelope pushing likes of The Choir (from whom the band gleaned its moniker). The new album also reveals a worship side of Circleslide that fans have always experienced at their live shows.

?We've always been a guitar-driven rock band and that hasn't changed, but we're taking a lot more risks on this album,? notices Martinez. ?It's been the most fun and exciting recording process ? Brandon was a wonderful ?captain of the ship? and we feel like these are the best songs we've ever written.

The undeniable and immediately apparent chemistry across the dozen cuts is especially refreshing in an iTunes age of picked-apart albums in search of a single or two. Echoes of The Light is conceptual from start to finish, sequenced impeccably to take the listener through a roller coaster of musical and spiritual emotions.

?We set out purposely to make an album where once you hear the first song explode into the second one, you'll want to give it a full spin,? confirms Martinez. ?The goal was for every song to be a winner to the point where you'd like to hear it again.?

Several cases in point include the charging, guitar-charged romp ?The Litany,? the pleading ballad ?Open Door? and the endurance anthem ?Eye of the Hurricane.? Additional vertically-tinged variety comes courtesy of the vulnerable yet gorgeous ?Love Amazing,? the ethereal crescendos of ?You Are Everything? and the vibrant fist pumper ?Nothing Compares To You.? Not only does the band sound more explosive, dynamic and melodic than ever, but the choruses are instantaneously contagious from an initial spin of the album.

All the while, it's impossible to take a listen through Echoes of the Light and not be struck with an unbreakable sense of perseverance from Circleslide members in both professional and personal contexts. In exposing their own vulnerabilities, the guys' authenticity is evident. At the same time, the album possesses an ability to inspire others from any walk of life looking for the resolve to press on.

?It could be someone without a job, someone else having a hard time in general with the economy, a person dealing with death, a single mom with a crazy schedule or a college kid chasing a dream ? no matter who you are, we want to remind you that you're not alone and God has given you the ability to keep going, no matter how hard it gets,? assures Martinez. ?Even in the midst of our brokenness, God is great and He's there to walk us through the restoration process.?

Echoes Of The Light