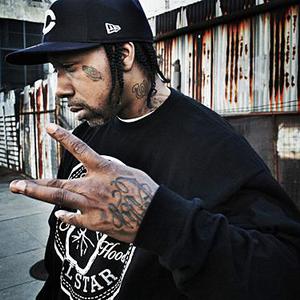 MC Eiht (born Aaron Tyler; May 22, 1967 in Compton, California) is one of the pioneers of gangsta rap with ties to the Crips street gang. He first emerged as one of the lead rappers of Compton's Most Wanted (CMW). He then became an actor and solo MC. He is best known in the acting world for his role as "A-Wax" in The Hughes Brothers' film "Menace II Society", and for providing the voice of "Ryder" in the video game "Grand Theft Auto: San Andreas".

e performed the soundtrack to the movie Menace II Society called "Streight Up Menace" n he did it menacing;y At the moment, CMW is set for a reunion which will feature on DJ Slip's next album "The Minority Report". MC Eiht also had a role in 1998's movie, Thicker than Water as Lil Ant with Mack 10, Fat Joe, Ice Cube, WC, CJ Mac, Big Pun, and Cypress Hill's B-Real.

The Best Of Mc Eiht

Keep It Gangsta (With Spice 1)