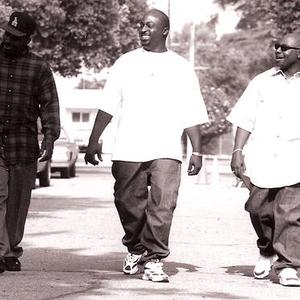 Above the Law is a gangsta rap group from Pomona, California, founded in 1989 by members Cold 187um, KMG the Illustrator, Go Mack, DJ Total K-Oss. Their first record deal was on Eric "Eazy-E" Wright's Ruthless Records, the independent label owned by Wright that featured major acts like N.W.A., The D.O.C., and Eazy-E himself. In 1990 they released their debut album Livin' Like Hustlers. Critically acclaimed on release, the album was produced by the group alongside casual member Laylaw and Dr. Dre, and featured a guest appearance by N.

Their first record deal was on Eric "Eazy-E" Wright's Ruthless Records, the independent label owned by Wright that featured major acts like N.W.A., The D.O.C., and Eazy-E himself.

In 1990 they released their debut album Livin' Like Hustlers. Critically acclaimed on release, the album was produced by the group alongside casual member Laylaw and Dr. Dre, and featured a guest appearance by N.W.A.. Despite the strong material, the album was a commercial flop. However, in their 1998 "100th issue," The Source magazine listed Above the Law's debut as one of the 100 Greatest Hip Hop Albums of All Time.

A 1991 EP was released to promote the groups sophomore album. However, by the time Vocally Pimpin was released, it had received mixed reviews. With only a scant few new songs and mostly remixes, the EP did not perform well.

It was during this time Dr, Dre was involved in a messy break up with Eazy E and Ruthless Records, and was (according to Ronin Ro's Have Gun Will Travel) contractually obliged to produce two more songs for the group. Although these songs were recorded, they were never released. It is possible the changing times at the reocrd label were responsible for the average quality of the EP.

In 1993, the group released the critically acclaimed Black Mafia Life. Go Mack was now gone, as was Laylaw, and Cold 187um took on the bulk of production. The group reinvented themselves with a fresh new sound which they referred to as G-funk. Dr. Dre's The Chronic released at the end of 1992, may or may not have adopted this sound, although it was released several months before Black Mafia Life, and sparked a long-standing debate between Dre and ATL over the originator of the sound.

Here is a snip from an interview explaining how the G-Funk sound came about.

Big Hutch (Cold 187um): Well here is the real. Weather people wanna believe it or not, I don't know, it doesn't really matter to me. G-Funk was actually created as a type of sound. It wasn't like ?this is gonna be our sound?. When we came to Ruthless, we were more like Funky melodic and NWA was more like matally sound. Like metal? like hard head break beatish. We brought the funky, vibey, groovey shit to the table. We were cutting ?Black mafia life?? actually we was cutting ?For the funk of it?, the EP which was between ?Livin' like hustlers? and ?Black mafia life?. I started mixing up a lot of Clinton shit and real funky shit and do it melodic. Melody style? You know you've got to remember the melody of ?London bridge? before you remember the words? That's how a melody is so intriguing and so step-on. So I was doing a lot of melodic stuff? but we was talkin' about ghetto shit. You know straight gutter? And we was cutting ?Call it what you want? and at the time people was like ?Your shit is kinda different. What do you call your shit?? and we was like ?You know this is some G shit mixed with some funk?. We would call it G-Funk or some shit like that.

At the time, Warren G was sleeping on my floor in my apartment and he was like ?Wow that's kinda cool?? and so we cut ?Call it what you want? and even Pac, this was before The Chronic, if you listen to ?Call it what you want? you can hear Pac saying ?I'm pumpin' G-Funk but you can call it what you want?. This was before The Chronic or anything? So the first time you hear the term ?G-Funk? on record it's from 2pac's mouth. So go do your research and that'll tell you the truth about that. It's on record. It has nothing to do with Warren G. It has nothing to do with Dr Dre because none of those records were cut with none of those guys. They weren't even in the building.

The album featured cameos by Tupac, Money-B, MC Ren, and Eazy E, as well as a quirky fresh new talent named Kokane (Cold 187um/ Big Hutchs cousin). The single VSOP proved to be popular, but once again the album failed to achieve success.

In 1994 the group were back with the hit single Black Superman, later cited as one of the 100 Greatest Hip Hop Singles of All Time in The Source magazine, 1999. The single preceded their third album Uncle Sams Curse, introducing a harder, more heavy and ominous twist on the G-funk they previously presented. Again Cold 187 took on the production and Kokane featured heavily throughout.

In 1995 label boss Eazy E died quickly of AIDs related illness, and the majority of the remaining roster at Ruthless Records began to jump ship from the waning label.

Above the Law would find themselves signed to Tommy Boy in 1996, where they released their fourth album Time Will Reveal.