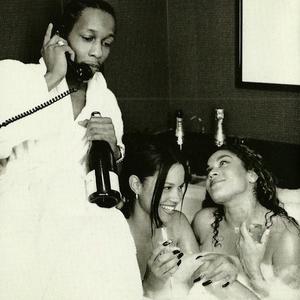 DJ Quik (born David Martin Blake on January 18, 1970) is a West Coast rapper and record producer from Compton, California. He was raised at 436 West Spruce Street in Compton, California. As a teen he took up an affiliation with the Tree Top Piru Bloods, hence why his name is spelled Quik with the C conspicuously missing. A lot of Bloods would let the name "Quick" (because CK stands for Crip Killer) but he chose "Quik" to represent the Red but at the same time in some form of respect for the other side .

He grew up without a father and moved out of his mother's home when he was only 17. He lived in the house as the only male with 8 sisters. His home life was far from stable as he raps in a song that one of his sisters was selling drugs to one of his other sisters. He began selling homemade mixtapes (like "The Red Tape", 1987) after he received a turntable for his 9th grade graduation and then began doing shows DJing around Southern California when he moved out. He signed to Profile Records in the summer of 1990, reportedly as the label's first six figure signee. Not only could he rap and write his own songs, he could produce as well.

His debut album, "Quik Is The Name" was led by the success of two top 20 R&B singles, "Tonite" and "Born and Raised in Compton." "Tonite" even charted on the pop charts. The album ended up reaching 10th on the album charts. None of his successive albums reached the success of his debut, though they have been well received in California, particularly his 1998 release "Rhythm-Al-Ism." His most popular albums are Quik Is The Name and Safe + Sound. . On "Safe + Sound" appears "Dollaz And Sense," which was a diss track to Compton rapper and member of the rival Tragniew Park Crips MC Eiht. Though full of bravado at the time, Quik now admits to fearing for his life during the period.

Instead of joining the G-Funk movement during the 1990's, DJ Quik had his own style that a new version of P-Funk, inspired by artists like Roger Troutman (who even taught him the use of the talkbox, which became a trademark for Quik's sound in the 1990's) and George Clinton. Throughout his career, Quik has collaborated with and produced for artists including 2Pac ("Heartz of Men", "Words To My First Born", "Late Night"), Janet Jackson ("All For You"), Snoop Dogg (e.g. "Doin' Too Much", "Buss'n Rocks", "Don't Tell"), Talib Kweli ("Put It In The Air"), Whitney Houston ("Fine"), Kurupt ("Can't Go Wrong"), Jay-Z ("Justify My Thug"), Xzibit ("Sorry I'm Away So Much"), Ludacris ("Spur of the Moment"), Chingy ("Bagg Up", and "Wurr's My Cash"),Dr. Dre, 2nd II None, Hi-C, Suga Free ("Street Gospel" album and on the "New Testament" album), 8Ball & MJG ("Buck Bounce") and others. Though he formally produced only "Heartz of Men" on 2Pac's masterpiece "All Eyez On Me" album, he went uncredited for work on many other tracks on the album; on that track he used his real name David Blake, because Profile did not allow him to use his stage name. In 2002, he produced Truth Hurts' Top 10 pop hit "Addictive". Quik used an uncleared Hindi sample on the record, and the copyright holders eventually filed a $500 million dollar lawsuit against Truth Hurts' label, Aftermath Entertainment.

Quik faced personal and professional tragedy when his friend and proteg? Mausberg was murdered on the 4th of July, 2000. This was compounded by the death of his best friend Daryl Reed soon after.

Following 2000's "Balance and Options" CD he was dropped by Arista Records which in 1998 had bought Profile Records. In September 2005, DJ Quik released his first independent album on his own new label, Mad Science, which was supposed to be distributed by Warner Bros but Quik was forced to let Time Warner and so signed his Mad Science with Fontana/Universal. The album is titled "Trauma" and reflects the turmoil in the producer's life over the past few years. He than released "Trauma: Instrumentals". In recent years he has worked with a 74 piece orchestra during a collaboration with Marcus Miller while working on the score to the movie "Head of State." Over the years, Quik has morphed from a hardcore gangsta rapper to a mainstream producer and rapper who is not afraid to change his style. He has not abandoned his West Coast roots and now produces very much his own unique style.

Born And Raised In Compton: The Greatest Hits

Greatest Hits: Live at the House of Blues