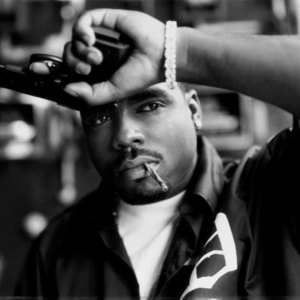 Daz Dillinger (AKA Dat Nigga Daz), (born Delmar Arnaud on May 25, 1973 in Long Beach, California), is an American record producer and rapper mostly known for his work with Death Row Records at the height of West Coast rap's popularity. Dillinger, like many of his peers, signed record deals with Death Row after being introduced to Dr. Dre by Warren G just as Dre began recording his seminal 1992 album, The Chronic.

He released his first album Dogg Food with Kurupt as Tha Dogg Pound which went multi-platinum continuing Death Row's force as the most successful hiphop label. After Dr. Dre left the label, Daz became Death Row's main producer and was largely involved in Snoop's sophomore album Tha Doggfather and various compilations and soundtracks. After the death of Tupac Shakur, the departures of Snoop Dogg, Kurupt, Nate Dogg and the imprisonment of label CEO Suge Knight, Daz was the only major artist left on Death Row and mainly responsible for the work done in the label. In 1998 he released his solo-offering Retaliation, Revenge and Get Back for the first time using the more commercial-friendly artist name Daz Dillinger and even though the album reached gold status it was considered to be a commercial failure for the still high standards established by Death Row's previous releases.

Around 2000 Daz left the crumbling Death Row records and started his own imprint DPG Recordz. He released his second solo-album 2000's R.A.W. independently. Although the album didn't reach the success of his Death Row releases the album gained cult status in the underground West Coast rap scene. After that, Daz has kept on his business as CEO of his record label and has released several EP's and LP's with his name.

In 2002 Daz and his long time friend Kurupt parted ways because the latter rejoined Death Row and Daz's "arch-enemy" Suge Knight. Since that Daz and Kurupt have each released several dis records aimed at each other.

On April 13, 2005, Daz reunited with Kurupt through the peace meeting labelled "Protect the West", in which several other West Coast rap icons united to put aside their differences in hope of succeeding together.

Daz released an album on Jermaine Dupri's So So Def label titled 'So So Gangsta ' which's was released September 12, 2006

Only On The Left Side

This Is The Life I Lead