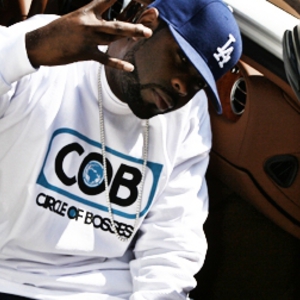 Dominick Wickliffe, better known by his stage name Crooked I is an American rapper from Long Beach, California. The name "Crooked I" comes from a shortened version of his original moniker, Crooked Intriago. It has nothing to do with the malt liquor. He is 1/4th of rap supergroup Slaughterhouse (with Joe Budden, Royce da 5'9" & Joell Ortiz), and is currently regarded as the best rapper on the west coast, after rising to hip-hop prominence with his freestyle series 'Hip-Hop Weekly', which he released a new freestyle over popular industry beats every week for 52 weeks.

His first album 'Say Hi to the Bad Guy', originally intended to be released on Death Row Records recently leaked on the internet, and he plans to release his first official album 'B.O.S.S. (Beginning Of Something Serious)' as a free digital download in 2009. Crooked I is CEO of his own record label, Dynasty Entertainment, and Senior Vice President of Treacherous Records. Before he became his own boss, he was also signed to Virgin Records, and most notably, Death Row Records, where he spent four years working under the infamous Suge Knight.

In None We Trust (EP)

Evolution Of A Boss CD2

Evolution Of A Boss CD1