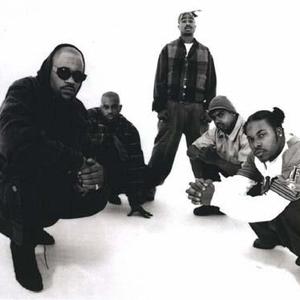 Thug Life was a hip hop group founded by multi-platinum selling hip hop artist Tupac Shakur (aka 2Pac) in late 1993. It featured Big Syke, Macadoshis, Mopreme, and The Rated R alongside Shakur. An interesting sidenote is that the Notorious B.I.G. was originally supposed to be a part of the group but was removed by record executives. The group released their first and only album, Volume 1, on Interscope in September 1994. After Shakur's incarceration in December 1994 and subsequent joining Death Row Records, the group eventually went their separate ways.

Consisting of Tupac Shakur, Rated R, Macadoshis, Mopreme Shakur, Big Syke, and with production and appearances by Stretch the album was originally supposed to be titled Thug Life: Out On Bail. The album was advertised on the liner notes of the single for Shakur's "Papaz Song". The single included the first song by Thug Life titled "Cradle to the Grave". The version that appeared on the "Papaz Song" single was not accepted by Interscope Records as a single and forced Thug Life to submit a remix. The remix was later on used for the album and the video. The title song, "Out on Bail" was rejected and the album's title Thug Life: Volume 1. The Notorious B.I.G. appeared on the track called "Runnin from the Police", which was supposed to be track 5 of the album. It was on the Thug Life: Vol. 1 promo version that was given to press outlets for review and reviews from the time still make reference to the song. The track was replaced with "Stay True" for the LP. The group eventually released their debut album, Thug Life: Volume 1, in September 1994 after it was rejected multiple times by Interscope. It only had ten tracks when dozens more were recorded during the sessions.

Promotion was lacking. The album didn't sell because few mainstream rap fans knew of it's existence. When Shakur was shot and incarcerated later that year, it forced Rated R and Macadoshis to part ways and the group quickly disbanded, although all remain on good terms and often collaborate on each other's projects.

Mopreme and Big Syke continued to rap with Shakur after his prison time while he was signed to Death Row. At the end of Shakur's life he and Big Syke were working on Thug Life: Volume 2, which was to be released on Makaveli Records.

As detailed in the film Tupac: Resurrection the concept of "Thug Life" was viewed by Shakur as a philosophy for life. Shakur developed the word into an acronym standing for "The Hate U Gave Little Infants Fucks Everybody." Also "Nigga" was interpreted as, "Never Ignorant Getting Goals Accomplished." He declared that the dictionary definition of a "thug" as being a rogue or criminal was not how he used the term, but rather he meant someone who came from oppressive or squalid background and little opportunity but still made a life for themselves and were proud.

"I didn't create Thug Life, I diagnosed it." - Tupac Shakur.

Thug Life became a calling card for how Shakur viewed his influence on society. He had people from all walks of life -- criminals in jail, white kids in the suburbs, poor black kids in the ghetto -- wanting to know how they could be a part of his movement. Shakur admitted this sudden power he had over people frightened him. But he used the idea of Thug Life to transform the desires of these people into something he viewed as positive, a way to reach out to the poor, the disenfranchised, and the oppressed. Gang members instituted what was called the Code of Thug Life, and gangs from New York to Chicago to Los Angeles claimed to abide by it. Examples of the rules in this Code of Ethics were that civilians were not to be targets in gang warfare, and that children in schools should not be indoctrinated by gang propaganda.

Shakur's philosophy of Thug Life was met with harsh criticism from most of the leaders in government and politics, including many notables in the black community.