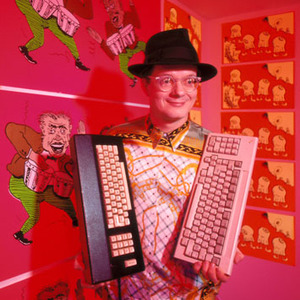 Mark Mothersbaugh (born May 18, 1950, in Akron, Ohio) is an American musician, composer, singer, and painter. Mothersbaugh is a composer, lyricist, and founding member of the New Wave rock group Devo. Mothersbaugh has developed a successful career scoring for film and television. His music has been a staple of the children's television shows Rugrats and Clifford the Big Red Dog. He also wrote the theme song for the new Felix the Cat show for Hanna Barbera, some music for Pee-Wee's Playhouse, and in 1990 and the theme song for The New Super Mario World for DiC Entertainment in 1991.

He is a regular on the children's television show Yo Gabba Gabba, in which he presents the "Mark's Magic Pictures" segment.. In film, Mothersbaugh has worked frequently with filmmaker Wes Anderson, scoring many of his feature films (including Rushmore, The Royal Tenenbaums, Bottle Rocket and The Life Aquatic with Steve Zissou). Mark is also known for his music in video games including Sony's Crash Bandicoot series, the Jak and Daxter series, and Maxis' The Sims 2. This work is often performed with Mutato Muzika, the music production company he formed with several other former members of Devo including his brother Bob Mothersbaugh.
Mothersbaugh also paints, in a style influenced by surrealism and Andy Warhol.

The Lego Movie 2: The Second Part

Cloudy With A Chance Of Meatballs