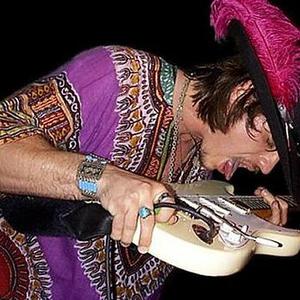 Born in Shreveport, Louisiana in 1977, music has always been in Lance Lopez's blood...as early as being in the womb. When the family had parties at their home, in rural Shreveport, Lance would bounce and roll in his mother's womb the louder the music got. They would play the records of Joe Tex, K.C. and the Sunshine Band and many other old school artists. Lance's father was stationed in the Army in Germany with Elvis Presley in the late 1950's and had a friendship with the legendary entertainer which had a profound influence on young LL.

Sadly Elvis died 1 month and 2 weeks before LL was born and so he never got to meet the King, although as early as age 3 his father showed him footage of Elvis throughout his career which inspired LL in what he wanted to do for the rest of his life. He began playing guitar at age 8, after his Father bought him an acoustic guitar for Christmas. He soon graduated on to a Japanese Squier Stratocaster and began emulating everything he heard on the radio or saw on television.

In the summer of 1987 one of 2 monumental experience's would happen to LL that would solidify his journey with the guitar. That summer Lance heard "Are you Experienced" by Jimi Hendrix for the very first time.
"I remember my brother putting this record on , it was vinyl ya know, and the first track they played for me was 'Are you Experienced', Lance remembers. "I thought Hendrix was a brand new artist, and as those backwards solos swirled around and seem to engulf my entire bedroom, I picked up the Album sleeve and saw Jimi, and being a product of the 80's, I immediatly thought of Prince and Purple Rain and I think Sign 'o the Times had just come out and I said 'Prince is over, this guy is gonna ruin him, he's over.' Naturally my brother and all his friends pointed and laughed at me for a good 15 minutes before telling me Hendrix had been dead for nearly 20 years." The second monumental event came in 1990 when Lance moved to Dallas with his Mother. After having been in Dallas for 2 weeks he attended the Benson and Hedges Blues Festival. The headliners at that Festival were none other than Stevie Ray Vaughan and B.B. King. "I knew right away what I had been searching for in guitar playing" recalls LL, "I wanted to play the blues more than anything else in the world and I started from the beginning and went out and got Robert Johnson, Son House, Muddy Waters, Bukka White, all that delta music, and started playing it back, on my acoustic." Lance had a variety of bands in Dallas with friends from school, and they began to play at house parties all over the North Dallas area, after living in Dallas for 2 years LL moved with his father to New Orleans where he began playing professionally with much more older and seasoned musicians, and began understanding the elements of funk and R&B.

After a time of honing his chops playing out live in New Orleans, Lance moved with his father to the Southwest Coast of Florida where he continued playing live and playing in a variety of blues and cover bands. Many hours of practicing and playing live had garnered Lance much deserved recognition. After moving back to Dallas, at 17, he was hired by the late-great soul singer Johnnie Taylor and toured the famed "Chitlin Circuit" with the Mr. Taylor, where he met and backed many more greats of that genre.

A year later Lance was approached by the modern blues great Lucky Peterson, who took him into his band as the rhythm guitarist.
Lance toured with the Lucky Peterson Organization throughout North America and Europe for three years. During that time he developed his energetic and original stage presence and continued to strengthen his musical skills. He was ultimately given the position of band leader before later embarking on his solo career.

In 1998, after forming a short-lived trio with legendary Hendrix and Santana drummer Buddy Miles and former Steely Dan and session bassist Chuck Rainey, Lance wrote, recorded and released his debut CD 1st Things First in 1999 on his own label - LaRoux Records. The cd was co-produced by Jay Newland (who later went on to produce and engineer Norah Jones).

In August of 1999 Lance entered and won the Southeast Regional Jimi Hendrix Electric Guitar competition at Tipitina's in New Orleans. He was awarded a Fender Stratocaster from Fender and the Jimi Hendrix family foundation.

In 2001 Lance won the Blues Band Of The Year award presented by DallasMusic.com. He was also awarded a citation of appreciation from Venlo, the Netherlands in 2001 during his European tour for 1st Things First.

Lance Lopez has been playing to enthusiastic audiences around the region, opening shows for legends like B.B. King. And in Europe opening for such notables as Jeff Beck and Steve Vai.

In 2003 Lance wrote, recorded and produced Wall Of Soul along with fellow guitarist and long-time friend Eric Gales, who lends his unique guitar and vocals to several tracks along with his production skills. This was Lance's second studio release and first release for Grooveyard Records. Wall of Soul also featured Doug Pinnick of the legendary trio King's X as guest vocalist on the closing track "Time". "Soul" was a pure exhibition of Lance's power trio skills and guitar pyrotechnics reminiscent of Jimi Hendrix, Robin Trower, and SRV. It also shows the more original Epic-Rock aspect of Lance's songwriting.

In early 2005, Lance reunited with Buddy Miles to form a side project unofficially dubbed Band Of Trouble, with Ex-Johnny Winter, Stevie Ray Vaughan and Arc Angel bassist Tommy Shannon. This unit combined members of Hendrix's Band of Gypsys with Stevie Ray Vaughan's Double Trouble to equal the ultimate foundation for Lance's guitar work. They shared the stage on concerts with artist such as Rick Derringer, Joe Bonamassa, Chris Duarte, and Kenny Wayne Shepherd.

The Summer of 2005 saw Lance hammer out the follow up to Wall of Soul. Simplify Your Vision, his second release on the Upstate-New York based Grooveyard Records. In this powerful,yet raw production, LL called upon some of the heaviest session musicians of Funk, Jazz and R&B in Dallas/Fort Worth and put them into a Power Trio setting, the results are amazing. From the thunderous power grooves of "Day Of Dreams" to the clean James Brown-inspired funk of "Shake Joint" to the Tour-De-Force title track, this is some of Lance's most spirited work to date. Another highlight of "Vision" is the remake of the Robert Johnson Delta-Blues classic "Stones In My Passway" in which LL and his sidemen go on an 8 minute Blues/Funk marathon guitar workout.

His most recent stage appearance is as opening act for ZZ TOP during their 2008 European tour, playing in his typical energic style.