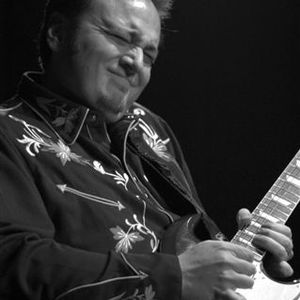 Born in Nanaimo, British Columbia, David received a ukulele at age 4 and his first guitar at age 5. Encouraged by his parents throughout his childhood, the guitar began to captivate him. By the age of 16 Gogo was working steadily as a professional musician. His interest in the blues could be considered unusual for a teenager in the early 1980's. Nonetheless, David was drawn to the emotional power and raw depth of such performers as Howling Wolf and Son House.

Things really fell into place for Gogo when the now legendary guitarist Stevie Ray Vaughan arrived on the musical scene. Finally, David had discovered someone with whom he could truly relate! Vaughan summed up everything that Gogo aspired to be. David soon had the chance to meet the Texas guitar icon, who encouraged Gogo to pursue and commit to become a serious blues artist. Shortly thereafter he formed a band called The Persuaders. Quickly Gogo and his band mates began making a name for themselves across Western Canada and they jumped from an after school project to opening for such legendary blues acts as Albert Collins and the Icebreakers.

After a European tour supporting the Fabulous Thunderbirds, Gogo signed a solo deal with EMI/Capitol Music. Although leaving his band was difficult, he realized his destiny was unfolding before him. In just a few short months Gogo was suddenly performing on stage with his idols B.B. King, Otis Rush, Blues Traveler and many others at the prestigious Montreaux Jazz Festival in Switzerland and guesting on Tom Cochrane's "Mad Mad World" album. He also found time to write material for his upcoming debut. The self-titled album was released to critical acclaim and garnered David a Juno nomination for Best New Artist.

Despite these successes, Gogo decided to part ways with EMI to pursue his passion for blues. Although this seemed a huge career risk at the time, leading with his heart paid off. Going back to his first love, the blues, Gogo released "Dine Under the Stars".

The album was snapped up by Dixiefrog Records in France and he signed with Canadian Independent Cordova Bay Records. Several successful European tours and American blues festival appearances followed. The release of the more rock-oriented "Change of Pace" got Gogo back on Rock Radio airwaves with the single "Sad & Lonely". The acoustic blues of "Bare Bones" also opened new doors and widened his appeal. It was a surprise to no one that Gogo was named "Musician of the Year" 1999/2000 at the West Coast Music Awards.

Gogo's fourth Cordova Bay CD "Halfway to Memphis" was released in Canada , US and UK with Dixiefrog handling European duties, once again. It was an immediate critical and commercial success, his strongest entry to that date.

"Skeleton Key", his fifth CD with Cordova Bay, expanded on his success while giving Gogo the opportunity to explore new ground. His ability to blend blues, soul and rock in an electric performance brings an innovative texture to his music. David hand picked a slew of fresh original works that show musical maturity and a full understanding of the blues/rock genre. And his treatment of unexpected gems by such diverse artists as Depeche Mode and Stevie Wonder illustrates his knack for turning material into contemporary blues/rock anthems.

His most current release is "VIBE" which is once again on the Cordova Bay Records label. However, distribution has been switched to MapleNationwide/Universal. This album is the first "all original" release by Gogo and features co-writes with John Capek, Tom Wilson and Craig Northey.

David is joined on the recording by Tom Wilson on the first single "Love in the City" which reached #35 on the national BDS Rock chart in October and by Jeff Healey on "She's Alright".

"David Gogo: Live at Deer Lake - Official Bootleg Series Volume 1" - was released on CD in late summer 2003. Initially, it was nominated for a JUNO Award in 2004 but the nomination was revoked on a technicality.

During the year he had tracks featured on several blues compilation CDs as well as performance appearances on albums by Downchild Blues Band, Bob Walsh and Chick Roberts.

Another important award received was the Alumni Award for furthering Vancouver Island Music in a global setting. This special award was given to him at the 3 rd Annual Island Music Awards - an event he has co-hosted all three years.

The single "Love in the City" from his VIBE CD reached #35 on the Canadian Rock BDS Charts, another achievement for an independent artist on an independent record label.

2005 started out with a bang as he won the Maple Blues Award for "Guitarist of the Year". He was also nominated for "Entertainer of the Year". The second single "Cry Harder" was released from the VIBE CD in February.

Since signing with Cordova Bay , Gogo's records have been released in Canada , USA , Australia , New Zealand , the United Kingdom , the Republic of Ireland , France Germany, Holland , Belgium and Italy .

These successes have David busier than ever and happy to find acceptance as a world class blues man. And, oh yes? David Gogo is his real name.

Christmas With The Blues