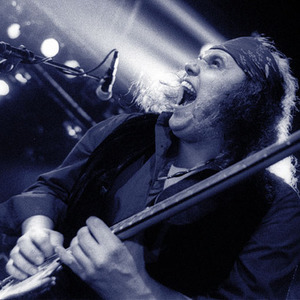 My name is Julian. I was born on a river in 1970 in a small town in the center of the Netherlands called Beneden-Leeuwen. Since I was born I have been a restless person, This is something that I still have today. Only until I was 6 years old I knew where this was coming from; I saw this movie called the Toronto rock 'n roll festival. There I saw Jerry lee lewis and Chuck Berry. From that day on I knew what I was going to be In my life I wanted to make music.

I was hooked as a little child on what I felt when I saw this movie, it was Jerry lees immense energy and maybe more important for my future I saw Chuck's guitar.

My mother saw that I dreamed and talked only about guitars from that day on. So they gave me little toyguitars and stuff like that but I kept dreaming about the real thing. By the time I was 10 I was into bands like Motorhead and AC/DC, Judas priest and Iron Maiden and more heavy stuff. Loud guitars and big Marshall amps and again a lot of energy. They saw me listening to music that most children of my age weren't doing at that time so I started again about a real guitar and when I was about 12 years old I got one an Ibanez les paul copy which I still have today.

With a guitar comes an amplifier so they gave me this 30 watt Yamaha where I could practice with. I started to listen to anything I could lay my hands on, and this is something that I still do today. I have never had no musical schooling so this is for me the only way to learn music. By listening and playing you start to know how things work. A friend of mine taught me some basic chords and a few scales and something about where to put your fingers and that was it. The rest was up to me. By the time I was 13 I heard something that really got me deep emotionally and his name was Muddy Waters. From that day on I decided to dedicate my life to blues and bluesrock.

When I was not in school I played guitar, I kinda locked myself in my room to become what I wanted. The guitar became and still is an obsession for me. I'm a very quiet guy in fact and this instrument really gave me the chance to express my feelings. When I was 17 years old it was 1987 and that was great year for me because I met a girl who is now my wife; someone who knows what drives me in being a musician and understand what music means to me. And it was the first time I saw Rory Gallagher. He shocked my world big time. That was what I was going to be. I started a band and two years later I quit school, because we had a lot of gigs and becoming a history teacher was not my thing.

I must have had a thousand jobs and a lot of jams and bands and duo's but by the time I was 26 I started this band called Julian Sas Band. We got a record deal and the first album was called 'Where will it end!?'. And that my friends is still the story today, when it is up to me we got along time coming, because we really love what we do. For me being a musician is all about freedom and doing what you really love. I am fortunate to be in such a position but then again I worked hard for it and still work hard for it because nothing in life comes easy.

So this is my story. I want to tell you that for me playing music is something I try to do until the day I will lay my guitar down and I will meet the great spirits in the sky. I will always write songs about loneliness and oppression and being free out on the road. Music still comforts my ever restless soul. Which after all these years is still inside of me...