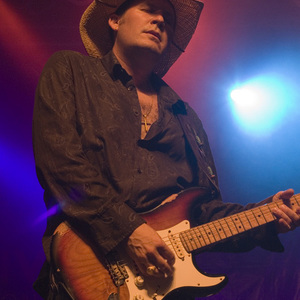 Scott Holt's lineage
Scott Holt's lineage can be traced easily back to the ?ground zero? of the Blues. Scott was taken under the wing of Blues legend Buddy Guy just as Buddy had been taken in by Otis Rush and Muddy Waters. It started on a cool fall night, at The London Victory Club in Tampa FL. After hearing his first Jimi Hendrix record and deciding that he simply had to play guitar, Scott Holt with his dad, went to see a blues legend in action. The rest as they say is history.

Scott discovered everything that he'd ever wanted to be that night, in that club, on that stage, roaring through that 100' guitar cable and pouring out of those Marshall speakers. After spending that night following Buddy out into the street to watch him play leaned up against a car, he spent the weekend following Buddy Guy and Junior Wells to their gigs in the area. He learned about Sonny Boy Williamson, Little Walter, Muddy Waters, Howlin' Wolf, cognac, and the many uses of the word motherf***er.

Buddy showed him licks and let him play his Guild guitar, which now hangs in the Rock And Roll Hall Of Fame in Cleveland, OH. He went home from that gig with the determination to become a bluesman/musician/entertainer. He drove his parents and the neighbors' crazy with really loud guitars and constant practicing. Some say as much as 8 hours a day! At home, he studied his growing record collection of everyone from Robert Johnson to John Coltrane. He formed the first incarnation of the Scott Holt Band and began laying the groundwork for a lifetime journey through the blues.

Over the course of the next year, Scott had the opportunity to jam with Buddy at several gigs including the opening night of Buddy's club Legend's during the Chicago Blues Festival. In 1989, he got a call from Buddy Guy asking if he'd like to join his band.

Saying yes led to 10 years of standing to Buddy's left on stages all over the world. Playing with everyone from Eric Clapton to Richard Gere! Playing Las Vegas and the Rose Bowl with the Rolling Stones. Playing on television shows like Austin City Limits, The Tonight Show, Conan Obrien and making the movie Things To Do In Denver When You're Dead. Traveling to Europe, South America, Asia and even the Middle East, spending nights playing in exotic places and seeing Carlos Santana or Ritchie Sambora show up to jam, or waiting to go on at the House of Blues in LA while Dan Akroyd and John Goodman worked out their introduction of Buddy. Playing The Hollywood Bowl, and being introduced by Bill Cosby with Hugh Hefner sitting in the front row. Sitting and talking with people like John Lee Hooker, Luther Allison, Albert Collins, Eric Clapton, Junior Wells, Koko Taylor and Willie Dixon. Meeting bands like AC/DC and Living Colour and listening to Ike Turner and Gary Busey tell jokes! Doing shows with everyone from Tony Bennett and Little Richard to Iggy Pop. While with Buddy, Scott was also working at home in Nashville with his own band and developing a reputation in town as one of the premiere live bands.

The original SHB laid the groundwork for all the musicians who have passed through this band to follow, a mixture of everything out of Scott's record collection. Some nights The Thrill Is Gone could morph into Sweet Home Alabama, or Never Make Your Move To Soon could become Stevie Wonder's I Wish. With the Blues as the foundation and the glue holding it all together, Scott put everything he was learning from Buddy into practice. Plenty of Scott and Buddy's conversations would start with Buddy saying "when you leave and go on your own..." So it was always sort of a forgone conclusion that someday Scott would have to leave the nest and make or break it on his own.

It finally happened ten years later, almost to the day, in 2000 with the release of Dark Of The Night, Scott's 2nd solo CD. Featuring an amazing collection of musicians; Mitch Mitchell and Billy Cox, from The Jimi Hendrix Experience, Tommy Shannon, Chris Layton and Reese Wynans from Double Trouble and produced by Eddie Kramer who engineered albums by everyone from Jimi Hendrix to Led Zeppelin, it might be the best record you've never heard! The original version also included a recording of Voodoo Chile (Slight Return) with Mitch, Billy and Scott which was the first recording of that song by that rhythm section since they had last played it 30 years previously with it's composer Mr. Hendrix himself!

Four more records have followed, including, Angels In Exile, Chipped Front Tooth, Revelator and the latest From Lettsworth To Legend - A Tribute To Buddy Guy. These recordings have found Scott &Co. working with artists like Little Feat, Tab Benoit and even American Idol contestant Melinda Doolittle.

Scott and his band have burned through more vans, racked up more miles and played more shows in the last seven years than The Rolling Stones, Elvis and The Beatles combined! It's the Blues, it's real music, not music made by machines or computers. Its music played from the heart every time. It's what Scott refers to as "A supreme form of prayer." Scott takes his musical lineage very seriously. As a disciple of Buddy Guy, his roots go directly back to Muddy Waters, Howlin' Wolf and Guitar Slim in a way that most of this generation of blues artists can't claim.

From Lettsworth To Legend: A Tribute To Buddy Guy

Dark Of The Night

Messing With The Kid