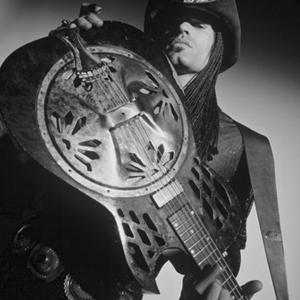 Slide guitarist and singer-songwriter Eric Sardinas has a reputation for packing intensity into his live performances. Since the late-90s' Sardinas has taken the stage thousands of times across the globe, with audiences growing exponentially each passing year. His six albums have displayed a distinct style that musically pushes the boundaries of rock and blues, and the world has taken notice. Now Sardinas has put his onstage lighting in a bottle for the new album Sticks & Stones...

Now Sardinas has put his onstage lighting in a bottle for the new album Sticks & Stones, an 11-song powerhouse of his trademark slide guitar that is a vehicle to drive his inspiration from the roadhouse in to mainstream music. Sardinas' unique mixture weaves his heavy blues and rock threads in to a flamethrower to the listener and takes them on a ride encompassing the past, present and future of what music is meant to be.

"Playing with intensity all over the world non-stop and loving every minute of it has been my inspiration," Sardinas explains. "That's why I get up in the morning and what I live for. Making music keeps me in the moment, allowing my heart to speak to people."

More fans have heard that voice with each tour Sardinas and his band Big Motor have made, and with each of the previous six albums he's recorded. Those discs include 2003's live-in-the-studio Black Pearls, which was produced by Jimi Hendrix's engineer Eddie Kramer, and 2009's Eric Sardinas and Big Motor, helmed by Matt Gruber.

Gruber, whose credits range from Ricky Martin and Carrie Underwood to the Scorpions and Lit, returns for Sticks & Stones ? an album that Sardinas says captures the full range of his playing and the energy and excitement of the trio's ?Big Motor' sound. "It's really about pushing myself," Sardinas continues. "My goal is to keep growing every time I play, which is why there is so much musical freedom in improvisation when Big Motor performs live."

For Sticks & Stones, the trio approached the studio with a no holds barred approach. Whether acoustic and electric, they stayed true to their live sound, recording with no rules. Levell Price (bass) and Chris Frazier (drums), join Sardinas in delivering a kaleidoscope that melds all the shades and hues of the band's intensity. "As always, every note is meaningful and has something to say from each player," says Sardinas.

His instrument of choice is his signature electrified resonator guitar (pictured above). Sardinas modernized an instrument made famous by traditional Blues artists in electrifying the instrument, and expanding the usual spectrum of what these guitars historically deliver musically. It is Eric's connection and homage to his roots, and in finding his own voice, comes the electrified resonator. His trademark expression and words to live by are "Respect Tradition," and the resonator is a deep part of this.

By deftly controlling his guitar's volume Sardinas can make the resonator emote the mood he's feeling with its acoustic energy or electrified growl, as it does during the breakdown on Sticks & Stones' pure spirited country blues "County Line," or roar like a lion on the hard-driving "Full Tilt Mama" and "Road To Ruin." The latter features one of Sardinas' highest flying slide solos: a sexy, sizzling break that's a perfect fusion of gutty energy and piquant melody ? two qualities Sardinas displays in spades.

The chugging instrumental "Behind the 8" puts his slide to the fore. One reason for his always-recognizable sound is his signature slide. The Dunlop company has begun reproducing a replica of the brass pipe that travelled a million miles with Sardinas. The calibration, weight, and wear of the infamous ?preaching pipe' has become accessible to players worldwide. Sardinas shares, "the original pipe has so much mojo on it from over a decade of worldwide travel, and being by my side through every beer soaked bar and venue the road has to offer, the original is now only used for studio. To Sardinas, it is irreplaceable. He offers, "If Dunlop offered me a million bucks for it, I'd have to turn it down."

The common thread in all the tunes on Sticks & Stones is the essence of affairs of the heart ? passions, hopes and dreams are all inspirational in a positive and negative way to Sardinas. He shares, "I like writing about universal themes. The trick is to find my own unique way of expressing myself within those themes. Every breathing moment if you walk with yours eyes open, there is song there."

A Florida-born Sardinas picked up a guitar at age six. He was inspired by the energy of roots music from his mom's soul, Motown, gospel, and early rock n' roll collection. From his elder brother, classic rock was always being played. Sardinas reflects, "Music was always heard in the house. I woke up to, and fell asleep to it. Still do". In his teens, he submersed himself in the Blues. "That was it for me," he says. "In blending my influences, I found my own sound. I feel very fulfilled being able to make this music my life for more than 20 years now. And my goal is to keep growing and improving, and to respect this music and stick by it the way its has supported and inspired me."