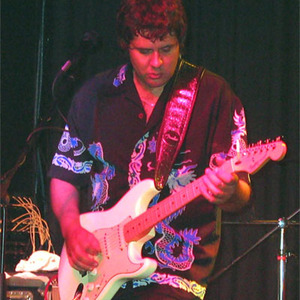 SEAN CHAMBERS RANKED TOP 50 BLUES GUITARISTS in BRITAINS GUITAR MAGAZINE Artist Information: SEAN CHAMBERS doesn't merely play the guitar as much as he boldly attacks the instrument with a fluid ferocity and attitude that has gained the attention of the major guitar magazines worldwide. Chambers is, in fact a first class axe man. Combining reverence for tradition with his own special jolt of electricity, he has crafted a style that is truly his own.

Sean toured with Hubert Sumlin as his guitarist and band leader from 1998-2003 and did several tours throughout The U.S. England, Ireland, Canada and the UK with Hubert. Britain's own "Guitarist" magazine named Chambers as one of the top 50 blues guitarists of the last century! After his tenure with Mr.Sumlin he later performed 3 more tours throughout England on his own, and in 2003 was asked to headline the Maryport Blues Festival there.
He was featured twice on The House of Blues Radio hour after releasing his first album "Strong Temptation." His second release entitled ?Humble Spirits? (2004) features several special guest artists including Bernard Allison, The Toler Bros, the late Bruce Waibel and several other great musicians. The CD was produced and engineered by industry veteran Bud Sneider (Allman Bros, Gov't Mule)
In 2004, shortly after his second cd release Sean was forced to relocate after his home was struck by 2 of the name hurricane's that did so much damage to the state of Florida that year. After being flooded out of his home, he was forced to take a day job to pay for expenses and a new place to live. Chambers worked 5 days a week for the next 4 years catching up and rebuilding his life, all the while still playing regularly around his home state of Florida to his steady base of fans. In 2009 Chambers went back into the studio to record what would be his most critically acclaimed album to date, ?TEN TIL MIDNIGHT?
?TEN TIL MIDNIGHT? was released on October 20, 2009 and has garnished a number of rave reviews since. ?Ten Til Midnight? appeared on the Living Blues Charts for the first three months after it's release, as well as appearing at #1 on the FL Roots & Blues charts for over 4 weeks in a row, and has been receiving steady airplay in 45 states around the U.S, as well as many markets overseas. The title cut was featured on The House of Blues Radio Hour with ?Elwood Blues? as an HOB Blues Breaker on Jan 20, 2010. The new album also continues to gain steam on XM/Serious Radio. It was a ?Pick to Click? on Bill Wax's show ?Bluesville? during the month of February 2010.
With this new release under his belt, and a new fire in his belly, Chambers and his band are preparing to get back out on the road to continue where they left off almost six years ago! Sean's regular touring band consists of longtime bassist Tim Blair and drummer Paul Broderick, who were also members of Hubert Sumlin's touring band. If you like your blues blazin hot, this trio will definitely light your fire!
www.seanchambers.com
HAMBERS-RANKED TOP 50 BLUES GUITARISTS IN BRITAINS GUITAR MAGAZINE..

That's What I'm Talkin About - Tribute To Hubert Sumlin

Welcome To My Blues