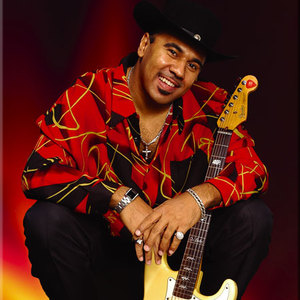 Ronnie Baker Brooks, born Rodney Dion Baker in Chicago, Illinois on January 23, 1967, is a blues singer and guitarist. His father, blues guitarist Lonnie Brooks, was a strong musical influence on Ronnie, as were Buddy Guy, Junior Wells and other Chicago blues luminaries who jammed at the Brooks' home while Ronnie was growing up. Wayne Baker Brooks is Ronnie's brother; the three Brooks' often appear as guests in each others' shows.

Playing with non-blues acts such as Aerosmith and The Black Crowes broadened Ronnie's influences and is reflected in his playing. Brooks adds elements of soul, hip-hop and funk to a a strong Chicago blues base. Brooks compares this to "how Muddy Waters took the Mississippi blues he heard in his youth and modernized it for his times by making it electric and harder."

He first stepped on stage at nine years old, playing with Lonnie Brooks at Pepper's Lounge in Chicago. Ronnie joined Lonnie's band full-time in 1986 and made his recording debut in 1988 on Lonnie Brooks' Live From Chicago - Bayou Lightning Strikes. He also toured and recorded with Elvin Bishop, Lil' Ed Williams, Katie Webster and Koko Taylor during this period.

Ronnie played his first solo gig in 1992, filling in for his suddenly ill father. He made the jump to permanent solo status after a New Year's Eve, 1998 gig at Buddy Guys Legends club in Chicago.

In 2008, Brooks was featured in the Legendary Rhythm & Blues Revue's first album and tour.