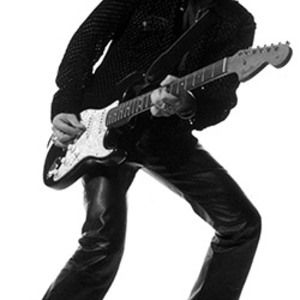 Born in Toronto, Canada, to a Portuguese father and a French-Canadian mother, Gomes began playing guitar in his early teens and was drawn to the blues sounds of BB King, Stevie Ray Vaughan, Buddy Guy, Eric Clapton and Jimi Hendrix. While hoing his skills in the blues bars at night, Gomes earned a Master's Degree from the University of Toronto in the 'Racial Evolution of Blues'. He relocated to Chicago in the late '90s to learn from the blues masters.

He relocated to Chicago in the late '90s to learn from the blues masters. During his brief stint as a sideman for Magic Slim and the Teardrops, Gomes put together his own group and won the first annual Buddy Guy's Legends ?Best Unsigned Blues Band? competition.

Gomes made his recording debut in 1998 with ?Blues in Technicolor?. The disc introduced him as a guitar-slinger loaded with impressive firepower. Gomes boldly stepped back for an intimate acoustic offering in 2000 with the critically acclaimed "Sweet Stringin' Soul."

In 2002, he released ?Unity? and proceeded to win the 2003 BluesWax Artist of the Year award. This accolade elevated Gomes to the top of the blues field, and consequently he was able to draw larger crowds to his live performances, which increased in frequency and scope. Gomes' endless touring kept him atop the blues field, as he continued to be nominated for BluesWax Artist of the Year awards several years in a row.

Anthony Gomes' latest release , ?Up 2 Zero?, represents a full-circle return to his love of high energy, guitar-driven blues rock. "This album is the most honest representation of who I am. The title represents getting back to the blues - back to ground zero,? says Gomes. ?Musically, most people try to look ahead for inspiration or seek out what's cutting edge. I seem to go in the other direction and look backwards to be inspired. In a strange way, when I listen to Muddy Waters or Robert Johnson I hear the future.?