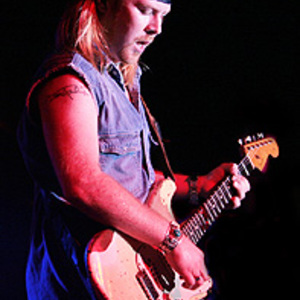 One of the greatest moments in the never-ending evolution of music was the invention of the Blues. From its beginning in the swamps and deltas of the South the Blues has spread throughout the United States planting its roots across the nation. When the Blues found its way to Texas it fueled such legends as Blind Lemon Jefferson, Lightnin Hopkins, Albert Collins, Johnny Winter, ZZ Top, as well as Jimmie and Stevie Vaughan.

This generation of Texas Blues has unleashed a powerful young guitar slinger; a player that drops the unsuspecting jaw of Blues lovers everywhere; a player some have said "is destined to be a Texas legend - a truly genuine Texas Blues Player".... Wes Jeans.

Micheal Wesley Jeans was born in the heart of East Texas on January 13, 1981, only fifteen minutes from where legendary Freddie King was born. Wes grew up in a musically-enriched family and showed an interest in performing at a young age. But it wasn't until the age of fifteen that Wes chose his path. He found an old three-string guitar in his closet andbegan learning the beginning riff of "Sunshine of Your Love." Wes' natural ability to learn music by ear and his relentless passion for playing caused an explosion of talent that most beginners only dream of.

In 1996, after only playing nine months, Wes entered the International Jimi Hendrix Competition held in Austin, TX and placed an amazing second among fifteen hundred otheryoung guitar players. Special guest Al Hendrix, father of Jimi Hendrix, told Wes "In my eyes, you won because you played straight from the heart like Jimi!" The dream of playing music for a living, moral support from his family and friends, and the ever-encouraging words of Al Hendrix set this Texas tornado in motion. Soon, Wes was playing area venues and festivals, attracting booking agents and record labels.


In 1999, Wes signed a record contract with Ice House Records of Memphis, Tennessee and began work on his debut album HANDS ON (pictured above). Wes recruited Al Green's bass player and drummer, John Williams and Lloyd Anderson, as well as Albert King's former B-3 player, Gregg Redding, to record at Sam Phillips studio. After being mastered at legendary Ardent Studio, HANDS ON was released in the summer of 2000. It became the highest pre-sale of any Ice House release and reached ..26 on the National Blues Sales Chart. Along with Wes' growing popularity came the demand for new releases. In response, in 2004, Wes and long-time friend and bassist, Syd Hydro, along with drummer Adam Hagerman, recorded a four-song demo (pictured below) at Night Song Studio in Knoxville, TN. The success of the independently-released demo fueled the group to film a live DVD. So, on New Years Day 2005, Wes and his band recorded LIVE AT JUANITAS DVD (pictured below) in Little Rock, Arkansas. This raw footage of Texas style Blues and Jimi Hendrix flare quickly became Wes' number one seller.


Throughout his career, Wes has had the honor of meeting and sharing the stage with many musical greats such as B.B. King, Buddy Guy, Jimmie Vaughan, Billy Gibbons, Dick Dale, Eric Johnson, Hubert Sumlin, Lynryd Skynyrd, Robert Cray, Joe Bonamassa, Indigenous, Lance Lopez, Chris Duarte, and Kenny Wayne Shepherd, just to name of few. After the October 2003 show opening for B.B. King in Shreveport, Louisiana, Wes' performance received a standing ovation and B.B. asked Wes onto his bus where he told him "Son, you keep your head on straight, you are going places."

Not only has he earned the respect of his peers, he has perked the ears of the media and has been featured by many newspapers, magazines and radio stations throughout the country and Canada. When a poll was done by Guitar Player Magazine in late 2003, readers voted Wes number three among the Young Gun Guitar Players in the nation between Jonny Lang and Kenny Wayne Shepherd(GUITAR PLAYER March 2004). In early September 2005, Wes performed and interviewed for a feature-length documentary that focuses on the guitars musicians have preferred over the past fifty years, Fender and Gibson. This Lightning Lab Production was filmed in the Historic Memphis Brewery and is scheduled for release in the first quarter of 2006.

Wes' unrelenting talent and genuine down-to-earth demeanor have won him the favor of many wonderful people, sponsors and endorsements. He continues to gain the admiration of his audience on and off stage. Adding on sponsorships that include GHS Stings, Rivera Amplifiers, Robin Guitars, Svetlana tubes, optic-case, and Seymour Duncan pick-ups. In October 2005, Wes' custom cabinet "The Beast," designed by Wes in conjunction with Mills Acoustics, is to be unveiled in Arlington, Texas at the Annual Stevie Ray Vaughan Remembrance Ride.

In June 2006 Wes released his 2nd studio album "Forest Of The Pine" under Texas Music Records. The album was produced by fellow axe-slayer Lance Lopez and is nothing short of blues/rock perfection. The record showcases Wes' amazing blues guitar prowess and guest stars Memphis' Eric Gales. Wes has followed the album release with touring playing shows with such notables as Eric Johnson, Robert Cray, David Lee Roth, and Indiginous. In August 06' XM Radio-Bluesville picked up "Forest Of The Pine" and has kept it in regular rotation on Stone Blue. Bluesville's Aaron Lee has this to say about "F.O.P"..."This cd kicked my ass! Its one of the best blues/rock cds of 2006!"-Aaron Lee

In January of 2007 "Forest Of The Pine" climbed its way up to the 3rd position on the German Blues Charts.


Wes Jeans is a "true to the Blues" Texas star.

Forest Of The Pine