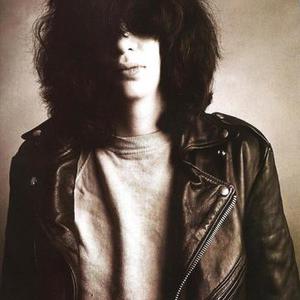 Jeffry Hyman (May 19, 1951 ? April 15, 2001), better known as Joey Ramone, was the vocalist for the legendary punk rock group Ramones. He and fellow band-mate Johnny Ramone were the only two members who stayed with the band until their retirement in 1996. Joey grew up in Forest Hills, Queens. His mother, Charlotte, encouraged an interest in music in both Joey and his brother Mitchell Hyman a/k/a Mickey Leigh.

Joey grew up in Forest Hills, Queens. His mother, Charlotte, encouraged an interest in music in both Joey and his brother Mitchell Hyman a/k/a Mickey Leigh. Charlotte spelled Joey's birth name 'Jeffry' without the 'e' as she wanted to make him different. Joey was a fan of The Who, among other bands (particularly "oldies"). He took up drums at 13, playing throughout his teen years, and was originally the drummer for the Ramones. Upon Tommy Ramone's suggestion that some particular parts of the band didn't work, he became the vocalist. Joey and his bandmates attended Forest Hills High School.

He was said to be the "heart and soul" of the Ramones, and his favorite songs they had performed were often the ballads and love songs. C.J. Ramone called Joey the "hippie of the group".

After the heyday of the Ramones in the mid-70s, they remained only an underground act throughout the 80s and 90s.

Joey was distinctive due to his towering height of 6 ft 6 in (1,98m), ectomorphic form, and long shock of black hair that almost completely obscured his face. Joey was known to have suffered from obsessive-compulsive disorder. Joey was born sterile, so he never fathered any children. He also never married.

Joey did not speak to guitarist Johnny Ramone for many years. The animosity began when Johnny "stole" Joey's girlfriend Linda, whom Johnny later married. They were also strongly averse to each other's politics as well, Joey being a left-leaning liberal while Johnny was a staunch conservative. The pair never made up with each other.

Joey died of lymphoma on April 15, 2001. He apparently had had the disease for a long time; he was sighted at a New York City cancer clinic that specializes in lymphoma in the mid 1990s. His passing was a sad shock to many, and seemed to signal the end of a generation. Countless memorials, both by fans and the rockers he influenced, followed.

Joey co-penned and recorded the song "Meatball Sandwich" with Youth Gone Mad. For a short time before his death, he took the role of manager and producer for the punk rock group The Independents.

His solo album Don't Worry About Me was released in 2002 and features the single "What a Wonderful World", his cover of the Louis Armstrong classic. In addition, this album featured a song entitled "Maria Bartiromo" in tribute to the popular CNBC anchor.

On November 30, 2003, Joey Ramone Place was officially named a new street in New York City. It is located alongside the block where the Ramones got their start at CBGB. His birthday is annually celebrated by rock and roll nightclubs, hosted in New York City by his brother.
Joey's mother passed away recently.

Don\'t Worry About Me