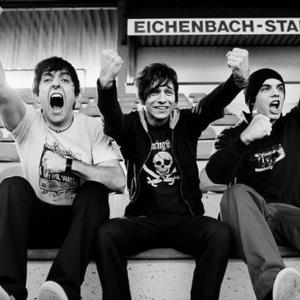 ITCHY POOPZKID ? okay, the story of the three chords & the dumb name of the band is well known by this time. Those who are still reducing ITCHY POOPZKID to the largely discussed points are, at least concerning the giving of the name, in good company with the band itself. They also think the name of the band is bullshit, but sometimes you have to be consistent ... For more talking about: Driving bus & each night in another club, hitting the strings. Those who are familiar with their boring home town (Eislingen an der Fils) underenthusiasm, whereever they are & at any time.

For more talking about: Driving bus & each night in another club, hitting the strings. Those who are familiar with their boring home town (Eislingen an der Fils) underenthusiasm, whereever they are & at any time. Apart from 400 concerts, often sharing the stage with some of their heroes. With the classical line-up drums, guitar, bass and the two-part singing by Sibbi/Panzer, in their stunningly perky manner & and with a good portion of charme, they never fail to deliver a rude show that moves the masses. With their debut album heart to believe ITCHY POOPZKID made themselves conspicuous in October 2005. Over 15 month the band has been on tourchange to the constant soccer training.

In spite of more than 110 shows in 2006, the three Eislingers succeeded in locking themselves up for months in a smelly, windowless studio and did not see the light of the summer of the century until it was well over & the album done. With TIME TO IGNITE they built the musical bomb they are going to blow up in 2007! Still more direct, more honest, extremely multifaceted and just 100% ITCHY POOPZKID. Hard riffs (better off alone, big shot) are standing alongside catchy melodies (take me back, you don?t bring me down) or energetic sounds (kante, personality). Seri?ll walk away). Produced by Achim Lindermeir (H-Blockx, Die Happy) and mixed by Olaf Opal (Notwist, Sportfreunde Stiller) they show in 13 songs how versatile punkrock can be if only you dare. Who doesn?t want to wait until the end of March ? no big deal. A week earlier, on March 23rd, the EP silence is killing me is being released.

Silence Is Killing Me CDM