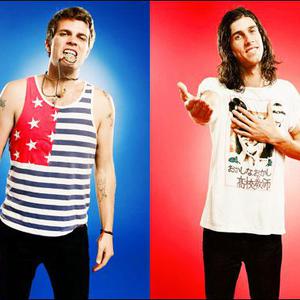 3OH!3 is an American electronica group from Boulder, Colorado, named after the 303 area code which covers Boulder, Aurora and the Denver metropolitan area. Formed in 2004, Sean Foreman and Nathaniel Motte were inspired by the hip-hop electronic scene and Foreman invited Motte to mix some beats and hang out with him. They released their self-titled debut album in 2007, but it was not a commercial success. Their second album, Want, was released in July 2008 and features the highly successful singles Don't Trust Me and Starstrukk (the deluxe edition has a re-recording which features Katy Perry).

After playing the first show in Florida of Warped Tour 2007, 3OH!3 signed on for all venues of Warped Tour 2008 with the exception of Philadelphia on July 25. Their song "Punkbitch" is featured on the Warped Tour 2008 Tour Compilation. The band has also played at national festivals such as Bamboozle Left. 3OH!3 commonly use skits and costumes during their live concerts and are known for their energetic shows.
The band then headlined the 2009 Alternative Press Tour across the U.S. with Family Force 5, The Maine, A Rocket to the Moon, and Hit The Lights. The band performed in Panama City Beach, Florida for MtvU's Spring Break in March 2009.
3OH!3 will again join the Warped Tour in 2009. 3OH!3 will also be apart of Kiss Concert '09 (Kiss 108), Kiss The Summer Hello 2009 @ Coca-Cola Field in Buffalo, NY, June 3rd 2009, along with Kevin Rudolf, The White Tie Affair, The Veronicas, The Ting Tings, & Elliott Yamin.
3OH!3 wrote an anthem for Major League Baseball's Colorado Rockies. The music video was shot at the Ogden Theater in Denver, Colo. and airs during broadcasts on FSN Rocky Mountain.
3OH!3's sophomore album on Photo Finish Records, Want, was released on July 8, 2008. It reached #44 on the Billboard 200. Their song "Don't Trust Me" became a hit in the U.S. in early 2009, peaking at #8 on the Billboard Hot 100.
In 2008, "Don't Trust Me" was featured on two separate episodes of The Hills, and they performed "Don't Trust Me" on Last Call with Carson Daly on November 13.
Advertisements for the show Candy Girls use the song "Starstrukk".
The band has done remixes of various songs from other artists, the most popular being "I'm Good, I'm Gone", which was originally by Swedish pop singer Lykke Li.
The music video for "Holler Til You Pass Out" takes place at Mesa Elementary and Fairview High School in Boulder. . On 3OH!3's official Twitter, it has been announced that they are making a song with Lil Jon.

You're Gonna Love This (Single)