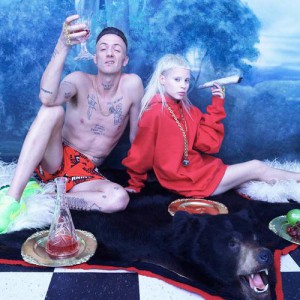 Formed in Cape Town, South Africa during Spring 2009, Die Antwoord is an afrikaans futuristic rap rave crew consisting of Ninja (Watkin Tudor "Waddy" Jones of MaxNormal.TV) and Yo-Landi Vi$$er. DJ Hi-Tek keeps the beats nice and dirty. The majority of their debut album, $O$, was released for free on the Internet in 2009 - Ninja also handed out free albums with hand-drawn artwork at live shows called $O$: Burnt By the Master.

The majority of their debut album, $O$, was released for free on the Internet in 2009 - Ninja also handed out free albums with hand-drawn artwork at live shows called $O$: Burnt By the Master.

As of Q4 2009, the band were 'officially' set to be working with Magnetron Music and were due to release a very special, limited-edition package for 2010 featuring the album, a DVD and a book. Die Antwoord's $O$ Album/DVD/Book package had a European release pending (featuring photography by Roger Ballen).

But, it is impossible to buy their music anywhere, it seems...

This was until Boing Boing posted their music video for 'Enter The Ninja', that they shot ahead of big-name acts on Google Trends. This, coupled with Limp Bizkit's Fred Durst and Katy Perry 'tweeting' about the group, caused a massive influx of interest in the band from various record labels worldwide with Ninja being quoted as saying ""Live Nation, the biggest events company in the world, wants to make a deal with us. There's an international bidding war going on at the moment over who's going to represent us. EMI Worldwide and Interscope Universal are bidding for my soul."

Regardless of who ends up signing them, the forth-coming debut album is currently now available to stream online in full and there's a free download titled 'Jou Ma Se Poes in 'n Fishpaste Jar'.

Suck On This (Mixtape)