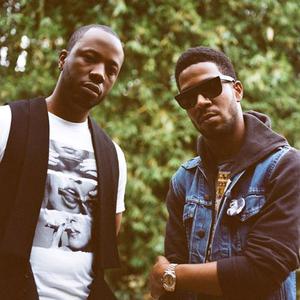 WZRD (pronounced one letter at a time, W-Z-R-D) is an American alternative rock duo, formed in New York City in 2010, consisting of American hip hop artist Kid Cudi and American record producer Dot Da Genius. In addition to being very good friends since 2006, Dot da Genius has been one of Kid Cudi's main producers, with the two creating work for his 2008 A Kid Named Cudi mixtape and both of the albums in Cudi's Man on The Moon series. The group's self-titled debut album WZRD was released in February 2012 and debuted at #3 on the Billboard 200.

It wasn't until they were recording "Trapped in My Mind" for Cudi's second album, that ideas of a rock album surfaced. In an interview with Complex magazine, Dot da Genius recounted the recording session: "It was pretty much the same time that we built a studio in Cudi's crib. We did "Trapped In My Mind" and we were dwelling on it like, "This is crazy, we need to put some guitar riffs on this." So I had my homie B-rent, come through Cudi's crib with his guitar, and Cudi did the guitar riff with his mouth cause Cudi couldn't play the guitar. So Brent replayed it. Then Cudi picked up [Brent's] guitar and started fiddling around with it, and I swear to you within like five minutes, he had a legitimate guitar riff. He never played a guitar a day in his life, but had a ill riff that we could make a song with."

Kid Cudi first unveiled the project in January 2011 after returning to Twitter announcing a new album he was hoping to have out by the summer. On May 31st, 2011 Cudi released the first offering from his rock project, a song titled "Perfect is the Word". It was the first song Kid Cudi and Dot da Genius worked on for the album.